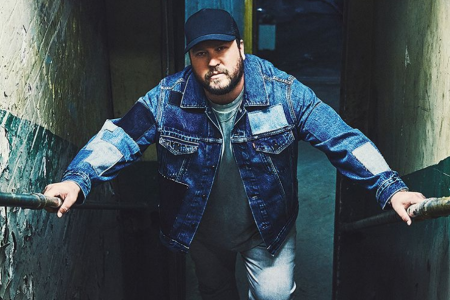 Riser House/Columbia Nashville/Sony Music Nashville hosted a celebration for Mitchell Tenpenny earlier this week recognizing his over One Billion streams threshold (currently 1.3 Billion), his first triple-platinum plaque for break-out debut single “Drunk Me,” a Gold plaque for his debut album Telling All My Secrets and a Gold plaque for current Top 10 smash single “Truth About You.” During the event, Mitchell shared details about his new 20-track album, This Is The Heavy, due out on September 16. The powerhouse vocalist co-wrote every song and co-produced the project with Jordan M. Schmidt. Today Mitchell revealed the full track listing along with a new song from the album, “Always Something With You.” Pre-order/pre-add/pre-save This Is The Heavy and listen to “Always Something With You” HERE!
Mitchell titled the album This Is The Heavy because the production packs a punch. “It’s big. It’s loud. It’s in your face and drum heavy,” Mitchell said. The project finds its own lane between a little bit country, and a little bit rock ‘n’ roll, and is without a doubt meant to be turned up. When describing the sound of the album, Mitchell laughingly coined a new genre: ‘Farm Emo.’ This Is The Heavy is also heavy in the sense that the lyrics have weight. Within these songs are the stories behind both good and bad memories – exciting times in his life and ones that were tougher to get through. With this album Mitchell finds himself grown up and in a new phase of life as a touring musician, family man and soon-to-be married man. Balancing it all can get heavy. With equal parts highs and lows intertwined by clever lyrics and Mitchell’s distinctive sound with a bit of extra edge, This Is The Heavy is a project Mitchell wants his fans to get lost in, and find themselves in.
The album includes his hit single, “Truth About You,” that he debuted on TikTok. The song instantly became the highest streaming debut of his career with 2.5 million streams in the first three days. The number doubled within a week and the song has now amassed over 125 million on-demand streams. The continued positive reaction from fans prompted its delivery to country radio, where it’s currently sits inside the Top 10. Additionally, Mitchell has a second single on the charts – his collaboration with Chris Young on their co-written Top 10 hit, “At The End Of A Bar.” The pair performed the song on the Today Show, The Kelly Clarkson Show and the 57th Annual ACM Awards.
This Is The Heavy Track Listing:
1. “This Is the Heavy” (Mitchell Tenpenny, Zach Kale, Josh Kear, Jordan Schmidt, Michael Whitworth)
2. “Good Place” (Tenpenny, Kale, Kear, Whitworth)
3. “Always Something with You” (Tenpenny, Ashley Gorley, Matt Rogers, Schmidt)
4. “We Got History” (Tenpenny, Andy Albert, Devin Dawson, Schmidt)
5. “Truth About You” (Tenpenny, Matt Alderman, Thomas Archer)
6. “Sleeping Alone” (Tenpenny, Brad Clawson, Rodney Clawson, Schmidt)
7. “More Than Whiskey Does” (Tenpenny, Albert, Kyle Fishman, Jordan Schmidt)
8. “Obsession” (Tenpenny, Daniel Ross, Whitworth)
9. “Good and Gone” (Tenpenny, Zach Abend, Seth Ennis, Geoff Warburton)
10. “Do You” (Tenpenny, Chris DeStefano, Claire Douglas, Whitworth)
11. “Bucket List” (Tenpenny, DeStefano, Laura Veltz)
12. “Cry Baby” (Tenpenny, Will Weatherly, Dallas Wilson)
13. “Miss You Cause I’m Drinking” (Tenpenny, Jesse Frasure, Emma-Lee)
14. “Elephant in the Room” (Tenpenny, Christian Griswold, Sean Small, Sam Sumser, Jaten Dimsdale)
15. “Happy and I Hate It” (Tenpenny, Schmidt, Warburton)
16. “Now We’re Talking” (Tenpenny, Albert, Schmidt, Warburton)
17. “Losers” (Tenpenny, Albert, J. T. Harding, Daniel Ross)
18. “Still Thinkin’ ‘Bout You” (Tenpenny, Archer, Fishman)
19. “Long as You Let Me” (Tenpenny, Archer, Fishman, Schmidt)
20. “That’s How She Goes” (Tenpenny, Brett Warren, Brad Warren)