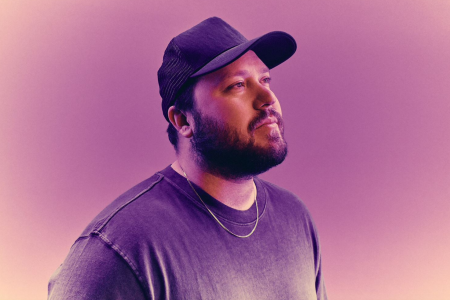 Mitchell Tenpenny has had a rollercoaster ride of a career. After quietly plugging away for years before hand, he burst onto the scene in 2018 with his single ‘Drunk Me’ followed by the album ‘Telling All My Secrets’. But as he gained traction in the States and overseas, the pandemic hit and in some ways, his career came to a halt. Unable to tour, he focused on his writing skills and returned last year with his EP ‘Midtown Diaries’. Recently though, those earlier achievements have been celebrated as he prepares to release his next album, ‘This Is The Heavy’. In a ceremony held in Nashville by his record label, Tenpenny celebrated a number of milestones within his career; his music reaching one billion streams, his first triple-platinum plaque for debut single ‘Drunk Me’, a Gold plaque for ‘Telling All My Secrets’ and a Gold plaque for ‘Truth About You’. “It’s just crazy, it really is,” he begins as he reflects on the event. “A billion is something I never even thought was possible – what a surprise that was. Then obviously ‘Drunk Me’ being triple platinum – that was our first hit.” Every time I talk to Tenpenny, I can tell that family and friends are so important to him and he credits throughout our conversation. He admits he couldn’t have done it all without so many people supporting him along the way. “It’s just humbling when you stand in a room like that, and you see all your peers and everyone that helped get to that, it’s pretty special. You go on stage and everyone’s there you’re like, you’re looking at me but they do not exist without you or you, you’re pointing at everybody because it really does take a massive team to do something like this. Then they surprise you with the gold record of ‘Telling All My Secrets’, the whole record, which I had no idea about. It really shows you how much of a team effort it takes.”

It was at this event, as he looked back on where it all began, that he announced the next chapter in his career – ‘This Is The Heavy’, a 20-track album due on the 16th September. As the name suggests, it is a little heavier production wise. “I think we got punched a lot. A whole pandemic happened and touring stopped and we got hit a little bit. So I wanted to tell where I was at, during those places. I wanted to write enough songs, that people could find their song in whatever they were dealing with during that time. And that’s why I called it, ‘This Is The Heavy’ I mean, the production is heavier, the drums are heavier, the guitars are heavier, but some of the lyrics are a little heavier too. I’m punching back for sure.” Tenpenny jokes that the sub-genre is ‘Farm Emo’, he expands on that, “I would say emo kids writing country songs! I came from that world of pop punk, that scene that was so prevalent from 2003 to 2013. I love that music so much. A bunch of the people that are in Nashville right now writing songs are all from those old bands or, playing in bands like that, or love that music.”

His love of pop-punk is shared by fellow writer and producer Jordan Schmidt who he worked with extensively on this record. “Jordan Schmidt is one of my best friends on the planet and he’s the best producer, in my opinion, in town. We write a lot of songs together, we’ve been writing since day one, we both had our first hits together. He did ‘Drunk Me’ as well. He comes from that rock n roll world. So when I told him I wanted to go in this direction he was all in,” Tenpenny gushes. Some of the songs on this record have been a long time coming. “It’s crazy the life of a song from when it’s actually written to when it actually gets to be heard,” Tenpenny reflects. ‘Truth About You’ is also on this album and Tenpenny is confident that it may hit the number one spot soon as just a few weeks ago he found himself top with ‘At The End Of A Bar’ his collaboration with Chris Young. But ‘Truth About You’ almost never made it out into the world, “We write so much I forget about some, ‘Truth About You’, I forgot about that song. We were getting ready to cut an EP and I was just listening back to songs and heard that so I put it out on Tik Tok as a demo, and it just blew up. It was like, Oh, my gosh, maybe this song should go on the record, then it becomes a single. So I feel like a song will find its way if it belongs.”

Though he lives in the here and now on this record, the final track, ‘That’s How She Goes’ allows Tenpenny a nostalgic moment as it’s the song that kickstarted his career. “I wrote that song like eight years ago with the Warren Brothers who are a great writing duo here in town, they gave me my first opportunity before I was signed. They told me if their write ever got cancelled, they’d give me a call and when they gave me a call, that was my chance, I began writing it in my studio, we wrote that song, I did the demo and that song got me signed to Sony publishing and then you know another artist took that song, I thought I was getting my first cut as a writer and then another one put it on hold but it never made a record. I always loved that song so to end this record with it is kind of like a full circle moment for me.” His latest single off the upcoming project, ‘Always Something With You’ is bound to resonate with fans right now. “I wanted to put it out now because it’s a fun loving, roll the windows down, summer song. Right now it’s the heat of summer in Nashville, it just feels like the perfect song to put up first, and people just roll down their windows and jam to.” He reflects on the unusual process behind the song. “I went into the studio that day, and my producer had this acoustic guitar riff and it was this really off time guitar beat. I was like, that’s dope. So I was immediately drawn to that song. We just started messing with melodies, we didn’t really have an idea. That song just kind of fell out because of that guitar lick.”

A number of these tunes were written pre-pandemic, like ‘Bucket List’ which has already reaped the rewards of it’s perfectly timed release. “‘Bucket List’ was written right before COVID happened,” Tenpenny reflects. “On my first record, I have a song called ‘Walk Like Him’ that I wrote for my dad who passed. So when we started thinking about making a new record, I wanted another song that talks about loss but not as specific as the song about my father.” ‘Bucket List’ was that song and he found a way of letting it speak to so many different people. “The first line of ‘Bucket List’ says, “I hate that the only way I can say what I need to say is with a prayer I hope is getting through the clouds.” You know how many people are, are finding that moment in life when they’ve lost somebody, they just want to vent, they just want to yell. I wanted to write it so they could put their own story into it. At the end of the day, this happens, it’s life, it’s part of growing up, but it’d be cool to realise how fragile time is, and make a bucket list and make some things to check off and then the pandemic happened.” The pandemic made us all stop and think for a minute and I myself, with nothing to do, created a bucket list that I could work on from home. “It was the most perfect song to put out in that time.” The song went to number one on The Highway and Tenpenny received many messages thanking him for the song as it helped so many people through difficult times. It was written with Laura Veltz who has a string of hits to her name, including Maren Morris’ ‘the Bones’ and Lady A’s ‘What If I Never Get Over You’. “Laura Veltz is so talented, you want to write better when you’re in the room with her.” I push him on what would be top of his bucket list if he was to write it down now. Reverting back to my previous point, his face lights up as he gives the definitive answer of having a family, but there are other goals too. “I think for me personally, I want to play Red Rocks one day. Then there’s this golf course that I’ve always wanted to play that me and my dad would watch called Augusta. It’s in Georgia and it’s gorgeous. My dad and I watched that growing up and I actually just got the phone call last week to play that in November. So I’ll get to check one of those off here pretty soon!”

He sees his future clearly now though, “I want to get to a point where, I get to have a farm one day, I want to have a farm and raise kids. As I get older, it’s not really traveling or doing stuff like that, I try to make those little moments but it’s more like, family – I want a family. I’m getting married here pretty soon and we want kids.” He talks further about the love of his life who he is due to marry in October of this year. “I have an amazing fiancé and an amazing family and incredible friends that allow me to do this, that understand. They don’t make me feel guilty when I’m on the road or trying to pursue my dreams and vice versa. Megan my fiancé is a musician too, and she travels so we get it. We both fell in love with music first. It doesn’t mean I don’t love her more than music. But that was our first love and we both want to give it everything we got to succeed.” They make time for each other and the rest of the family as much as they can, striking up a healthy work life balance, “So it starts with an understanding and then my brother’s on the road with me, he’s my bass player. My family just understand it and when we’re home, we’ll get together at my mum’s house. So we just try to make the family time when we get it.”

Currently on tour with Luke Bryan, Tenpenny teases more time on the road as we begin to wrap up the conversation. “We just got a great call the other day about the tour next year, who we’re going to be out with – there’s a lot of good things happening. I just couldn’t be more excited about the future and to spend that future with my future wife!”