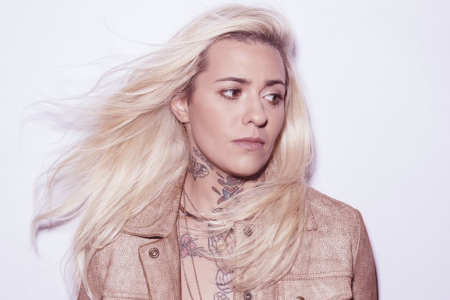 Morgan Wade brought out one of the most talked about albums of the year in 2021. Her debut, ‘Reckless’ introduced us to her raspy soprano vocals as she sung about real life problems; pushing the boundaries, mental health, alcoholism and it’s after effects. Her voice and lyrics were wise beyond her years. Now signed to Sony, Wade has released a deluxe version of the album that propelled her into the hearts of country fans around the world and she will soon be stepping outside of the US for the very first time as she plays Country 2 Country Festival.

From an early age, Wade was tuned into the world around her both the good and bad and was filled with empathy for those around her. She channelled those feelings and observations into song at age seven. “I started writing songs when I was seven years old. I always knew I wanted to be a songwriter, it was something I was very passionate about,” she begins. She recalls the topics her earliest songs drew upon. “I was 10 or 11 and my dad was going through a divorce. I wrote a song about that, and I remember sharing that with my grandma and she was just kind of like, wow, that’s some deep stuff for a 10 year old to be writing. I think that I’ve always, from a young age, written extremely authentic, real stuff. It just shows how adult like I’ve always written.”

Though she was honing her writing skills from an early age, it was a while before Wade took to the stage, a break-up the catalyst for her to go and try it out. “As I got older, I was playing guitar and things like that. I knew that was something I wanted to do, I just didn’t know that I was going to have the ability to do that. I didn’t think I had the talent to go out and actually perform but when I was 19, I went through a breakup and I formed a band. That just gave me the courage to go out there and I’ve been doing it ever since.”

Channelling her feelings into her music she went on the road with her band at the time but that brought new problems for Wade to deal with. A little dutch courage and after-show drinks – Wade knew that wasn’t a healthy or sustainable lifestyle and she decided to cut drink out. The battle she has had to keep her sobriety whilst she lives and works in a drink fuelled environment is detailed in ‘The Night’ a previously released stand alone track that has recently been added as one of the deluxe tracks on ‘Reckless’. “It’s definitely very therapeutic for me,” Wade says as she thinks of the difficult subjects she talks about in her songs. “Even though it is therapeutic, it’s still hard. I mean, I feel like sometimes I am a little reluctant, I think is that too much? But I also think that the best art comes from being authentic and honest. I think that’s what people connect with most. So, even if it scares me a little bit, I feel like, the best songs I can write are the ones that I’m a little reluctant and a little scared of.”

Turning to songwriting to help her through the toughest of tests has served her well during the pandemic too. Wade and long term collaborator, Sadler Vaden, Jason Isbell’s guitarist, penned the first single from the deluxe record, ‘Run’. “We wrote that together over Skype during the middle of the pandemic,” Wade reflects. “I just had a line in my head for a minute, ‘But can we fly somewhere foreign? You get me high, mess me up until the morning’. So when he got on, he was like, I had this idea and he had the guitar riffs down. He was like, ‘I just feel we need to write a song called Run. I just have this vision in my head.’ I was like, well, that’s fitting because I’ve had this line. I think we were just in a time where we really wanted to get away and get out of the house and go somewhere else we couldn’t. I feel like the story itself, wrote itself a little bit.”

As is so often the case in music though, each individual listener has connected to it differently and for so many it has helped them through whatever dark place they are trying to escape. “I’ve had a lot of people interpret it in different ways. Some people see it as a woman trying to get away from an abusive relationship and be free. So I think it’s really cool that people can take that song and connect it to something else.”

As well as the originals, Wade went back to her earliest inspirations to pick out a cover song that she could make her own on this album. She reflects on the things she listened to growing up. “My grandfather was big into bluegrass music. When I was with my dad and mum, they listened to a lot of 90s country music; Shania Twain and Tim McGraw, Faith Hill, that kind of thing. But I gravitated towards Elvis, that was my big takeaway, when I discovered Elvis, that’s literally all I wanted to listen to and I still listen to him to this day.” It was a song Elvis made famous in 1969 that Wade made her own both on tour and on ‘Reckless’. “We toured pretty hard for the last three months. I normally don’t do cover songs live. I love ‘Suspicious Minds’, I think it’s a great song. So I talked to the guys and said, why don’t we kind of make our own version of that? So we did, we started playing it live and everybody loved it. I had so many fans and people around me saying you need to record that and it just fit perfectly.”

This month, Morgan Wade will take to the stage at Country 2 Country and it will be her first time stepping foot outside of the UK. However, she knows what to expect from the UK crowd as many of her artist friends have told her of their experiences across the pond. “I have been told that I am about to play in front of the most respectful people,” She says, glowing with excitement. “So I’m really excited about that. Someone told me, I can’t remember who, but they said, they listen like a sober crowd, but they clap like a drunk crowd. I think that’s awesome. I’m very excited about that.”