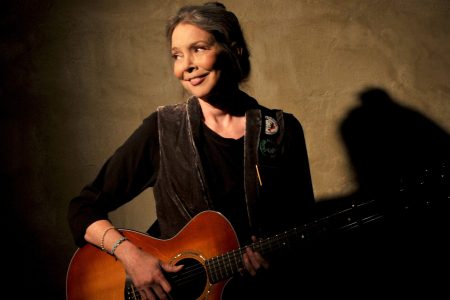 Support for the evening came from the Kennedys; a husband and wife duo who started out in Nanci’s band and credit her for them getting together both professionally and personally. They took the opportunity to play us a selection of old and newer material, showcasing some interesting vocals and some fabulous musicianship. Stand out track of their set, for me, was Half A Million Miles, which they wrote for their anniversary. I won’t spoil the story. They then invited Nanci to join them for a tribute to Davy Jones of the Monkees. Daydream Believer became a singalong, which I’m sure Davy would have loved. Following a break, the Kennedys returned with Pat McInerny, a long-standing member of Nanci’s band. Nanci then came out to join them to huge applause. Each took their seat in the very informal set-up; four seats and microphone around a lamp in the centre, creating a very cosy atmosphere indeed. Introducing “a John Prine song,” she launched into Speed Of The Sound Of Loneliness, which received applause before she had sung a note. Immediately I was struck, once again by that voice. Talking about 21st century country girl, Elizabeth Cook, Nanci told us how, after she lost her own mother, Elizabeth “loaned her hers.” Now she has passed on, Nanci told us, she believes they are seated round a table in the sky drinking moonshine. There’s another story there but I’ll leave Nanci or Elizabeth to tell you it! Speaking of their mothers, however, prompted a heartfelt performance of A Simple Life, which the pair wrote together. Dedicating her next song “to all our flyers in the field,” an absolutely exquisite version of The Flyer followed. Poignantly it seems just as relevant now as when it was first recorded. A selection of songs from her new CD, INTERSECTION, gave us a good flavour of the CD. Telling us the background to Bethlehem Steel gave it a whole different feel. The arts centre adjoining built a see through glass panel to the closed down steel works, which created a back drop to the stage. What an inspired idea. The sentiment of the song could apply to so many places we’ve all seen close; locally alone I was thinking of the mines, shipyards, Swan Hunters and very recently McNulty’s on the River Tyne. A further musical reminder that despite the fact we are separated by miles and oceans, we have very similar experiences. I Ain’t Never Going Back, gave her a chance to surprise us a little when she stated that it describes how she feels about her native Texas, a place that I love. A song in her back catalogue I never thought I would hear live is It’s Just Another Morning Here. When it appeared again on the new CD, I dared to hope and was ecstatic when she sang it, telling us that the original she recorded with Phil Everly, no less.

She further indulged us by telling us that it was inspired by a couple who pulled into a motel, leaving their child in the car whilst they had a row in the room. Sung live it was every bit as powerful as I had hoped. It has never been a secret that one of Nanci’s closest friends is songwriter Julie Gold. Telling us about singing her song From A Distance at the Olympics, with Raul Malo and Donna Summers, she reminded us how this song has stood the test of time as an anthem for peace, before delivering the best version I’ve heard. It is hard not to get chills when she delivers the title line in a variety of other languages, which subtly brings home the point of the song. I wonder if Julie Gold had any idea when she wrote it that it would still be so relevant today. Talking about her family and ancestors out in Texas, she painted a fabulous picture with words of how it was back in those dustbowl days, as she led us into perhaps the most stirring version to date of Trouble In The Fields. She related the amazing story of Richard and Mildred Loving back in the Civil Rights days and how they changed laws beyond all recognition to permit inter racial marriage. It was clear that Nanci holds strong feelings on the subject and her song, The Loving Kind, perfectly encapsulated their story. Hard to believe it was barely a generation ago that these attitudes were held so strongly. Indeed, such is the power of the song that Nanci won a well deserved n American Civil Liberties award. You have to admire her for saying it how she sees it.

The world would be a better place if more of us could follow her example and speak up for what we believe in. Nanci talked briefly about the late songwriter Kate Wolf and also about war journalist Dickey Chapelle, about whom Nanci wrote a song some years ago. Bringing the two together, she talked about journalist Marie Colvin and sent the Kate Wolf song Across The Great Divide, out to her memory and for all she stood for and believed in. She then stated that she has no doubt Kate, Dickey and Marie are drinking Moonshine at that same table as her mother. I’d love to hear that conversation… Tequila After Midnight upped the tempo and sounded great live, whilst Listen To The Radio, was dedicated to her hero Loretta Lynn and several great UK radio personalities; Bob Harris and Ricky Ross among them. An unexpected highlight followed, when Nanci suddenly introduced two new band members; the Clap Brothers. Her road crew came out dressed in t-shirts bearing the words Hell yes and Hell no. Telling us that the video for this song has gone viral (it’s on YouTube) she can’t recall what it was but she “mad as hell about something” when she wrote it. Delivered with perhaps the most attitude I have ever seen from her, aided by the Clap Brothers clapping and dancing, it became an impromptu singalong as Hall 1 appeared to unite to pass comment on the current state of the world: ‘Hell No, I’m Not Alright.’ Enough said. Leaving the stage to rapturous applause it was clear she wasn’t leaving without an encore. An a capella version of The Road To Aberdeen was a beautiful choice to remind us we are all very much connected through music, not just in that room, but in life.

All I can say is I hope that connection brings us back together very soon; without a Nanci Griffith show to look forward to, tomorrow will indeed be Just Another Morning Here.