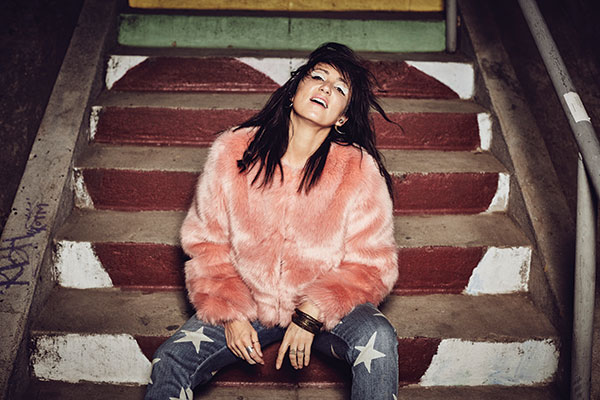 It’s hard to believe, at least for me, that it’s been 12 years since KT Tunstall burst onto the scene with a positively received set on Later… with Jools Holland. She subsequently released an album every three years, but following 2013’s ‘INVISIBLE EMPIRE/ CRESCENT MOON ’, she chose to switch her focus from her solo career towards writing songs for films. It seems, however, that such plans weren’t set in stone, and she’s now anticipating the release of a new album, and has been touring across the United Kingdom.

“It was a bit of a surprise to me, because I’d pretty much decided to take a massive hiatus,” admits KT, who despite being busy preparing for her evening gig at The Tabernacle near Notting Hill, seems lively and upbeat. “The last record was very down tempo, and after making that record and touring it, I mistakenly thought that I didn’t enjoy gigging any more.”

The turnaround for KT took time to transpire, and it was a combination of factors that led to her return. On the one hand, she played a couple of retrospective gigs, and her creative flames were fuelled by the up-tempo performances of songs from her back catalogue. “I was jumping around like a mad Mexican bean again,” she says, perhaps coining a new phrase. “I realised that for me, there needs to be sweat; there needs to be an intense physical element for me to enjoy it. I was actually relieved to realise, ‘I do still want to play’.”

KT’s inspiration also came from moving to Los Angeles, which she’d always wanted to do. The timing had seemed right too, as INVISIBLE EMPIRE/CRESCENT MOON had been released shortly after a divorce and the death of her father. “Basically, my life was turned upside down,”she admits. “I sold everything and moved to Venice Beach to live an enjoyable life.”If ever there was a time to focus on California dreaming, this was it.”

“I was driving around the canyons a lot”says KT. “I’m a big fan of David Lynch, and obviously Neil Young, Joni Mitchell, Tom Petty, Fleetwood Mac; all these amazing Californian bands. You start to understand why that music came out of that landscape and that area at that time.” Before long, KT settled back into her groove. “I started writing these really big pop songs, out of nowhere” she says. “And then I decided to really dig in and work my arse off [as an aside, KT has a delicious knack of knowing exactly when to swear], to write the best record that I possibly could. I just feel like I’ve absolutely got my mojo back, in a way that I haven’t had for years.”

As you’d have guessed from the positive tones, KT is in a very different to headspace to the one she occupied as she wrote her last album. “I feel like the last record was kind of like the soundtrack to my own funeral” she says, though she later adds that it would be a pretty good funeral. “This album is kind of the phoenix of a new phase in my life, and I think the liberation from feeling like I had to do it [record the album] was incredibly important.”

This liberated feeling led to a speedy process, with KT starting to record the new album last summer, and the record being mastered at the end of May. This was aided by a rapid spate of writing over the Christmas period, with KT drawing inspiration from a trip to Mexico, and a stay in a cabin at the Joshua Tree. “[In Mexico] I chopped wood and sat by a fire in snow, and just wrote for six or seven hours a day” she says, detailing her awesome yet unconventional methods.

I ask KT if it also helps that she’s an established presence. “Yes and no” she replies. “Over the last three or four albums I’ve put out, it became increasingly difficult. It got more and more introspective, and I got more and more uncomfortable about being vulnerable, and being honest and showing myself, because it’s fucking weird. It’s weird knowing that there’s millions of people, and there’s always that expectation.” There are positives too though, and KT says she’s become more comfortable about who she is as an artist. “I think this album is the first time I really feel like I’m completely in touch with what I do best, which is pop, really. I’m not self-conscious about being a pop songwriter anymore, whereas I have been.”

Taking ownership of what she’s doing has meant more than just being comfortable with where she sits in terms of genre. It’s also been a case of upping her involvement at every stage of the process, and looking at the commercial aspect of her career. “I’m really excited about being the boss of it all, and before I was very apprehensive, to the point where I would self-sabotage a little bit,” she explains. “It was like shy-bride syndrome, where I didn’t want to be at the centre of attention. It felt uncomfortable, I just wanted to sing.”

Things are different now, and KT has also been using a Pledge campaign in order to raise funds. This means she’s been able to sell pre-orders, and provide the chance to purchase access to behind-the-scenes footage and paraphernalia. “It’s an amazing way to include fans in the process of making a record,”she says. “It also gives us extra financial stability to put more into the music – the money goes towards the music rather than my holidays by the way!”

Moving on to the new album, KT reiterates that it’s a departure from INVISIBLE EMPIRE/CRESCENT MOON. “The record is really about galvanising people and their friends, and finding their drive” she says. “It’s amazing as you get older, because once you go through some really big shit in your life, the reaction of the people in your life really informs you of who your friends are. And it feels kind of terrible at the time because sometimes you feel let down or disappointed or surprised by people not being there, but then you’ll realise that it’s such a valuable thing to work out who the people are who are right for you, because then you have all the time for them. It’s a cleansing experience I’ve found.”

As KT takes to the stage later that day for an intimate gig at the Tabernacle, her words about having her mojo back come to life. She’s a vibrant presence, with a cheeky sense of humour and a sense of calm despite working her way through a relatively new set. The only real downsides of the gig were the decibel allowances at the venue, the relative quietness of her microphone, and the presence of a handful of fans/hecklers [it was hard to tell] who kept shouting her name and laughing. It didn’t put KT off her game, and she also provided some entertaining insights into her music videos, including her quasi-audition for Game of Thrones, and being able to spot her stunt double in the video for ‘If Only’ due to the difference in the shapes of their bums.

The reviews for KT’s recent shows have been encouraging, which doesn’t surprise me. She seems to be in a good place, both as an artist and as a person. The new songs are going down well, and the older material still gets a considerable reaction from fans. 2016, as far as I can tell, is shaping up to be a year of resurgence for KT, and another spell in the limelight could well be on the way. For those of you hoping to hear her latest output, her GOLDEN STATE EP will be out next month. Ian Horne