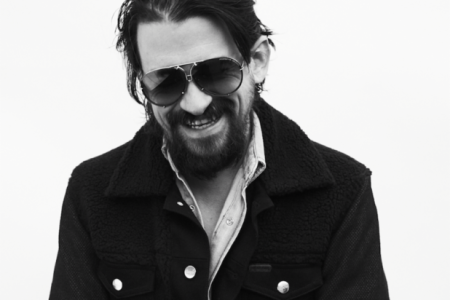 For nearly two decades, Shooter Jennings has defied expectation while constantly expanding the parameters of country, rock ‘n’ roll, and beyond. The scion of American music royalty, he has affirmed his own place in histories still to come as a truly limitless artist whose ambitious experimentation spans myriad genres and creative platforms, from releasing seven solo LPs, countless EPs, and founding his own label and multimedia outlet, Black Country Rock, to hosting his “Shooter Jennings’ Electric Rodeo” on Sirius XM’s Outlaw Country channel, producing music by Jamey Johnson, Wanda Jackson, and his mom, Jessi Colter, and the creation of acclaimed BBS Door games (available via his own BCRGames.com).
Produced by longtime friend and collaborator, Low Country Sound founder Dave Cobb, at the renowned RCA Studio A on Nashville’s Music Row, SHOOTER sees Jennings staking out a fairly straightforward goal: to simply make a great country record. It should be noted, Jennings’ last studio album was a genuinely visionary tribute to Giorgio Moroder so in some ways, making a straight up country record is as much of a left turn as anything else in his brilliantly mercurial career thus far. But with tunes like “Fast Horses & Good Hideouts” and the brass-fueled boogie-woogie of “Bound Ta Git Down,” Jennings more than affirms his mission by returning to country’s original, if oft misplaced, mandate: singing songs about growing up and getting older, about going out and getting trashed. In short, making music for real people with real lives. With SHOOTER, Jennings truly puts his own mark on country music, living up to his extraordinary birthright with unparalleled passion, experience, and heart.
“It’s a very honest record,” Jennings says. “There are no magic tricks. It’s really stuff that’s from the heart; it really encapsulates a lot of the styles I’ve done across all my records. Dave said, ‘Can’t we just call it SHOOTER?’ I said, I love that. Let’s just call it SHOOTER.”
Heralded as one of 2018’s “30 Most Anticipated Albums,” SHOOTER is available for pre-order. All pre-orders are joined by an instant download of the project’s first single, “Fast Horses & Good Hideouts” which sees Jennings and GRAMMY Award-winning producer Dave Cobb (Chris Stapleton, Jason Isbell) sharing songwriting credit with iconoclastic character actor Randy Quaid.
In addition, the single is joined by a new companion visual – directed by TK – that sees Jennings hosting his own variety show, entitled “Hey Shooter!” “Fast Horses & Good Hideouts” is streaming now at the official Shooter Jennings YouTube channel.
“Randy and I had been corresponding for a while,” Jennings says of the song’s genesis. “I was trying to get him and his wife on my radio show, but nothing ever came of it. Then I asked him about one of the YouTube videos they made of him reading out of the Bible, I wanted to play it on the Christmas episode. He wrote back, saying I’d fulfilled this lifelong dream of his to read the Gospel on the radio, and he signed it, ‘Here’s to fast horses and good hideouts.’ I thought, that would make a great song! So then I went and wrote it.”