New Single from The County Affair Ahead of Festival Dates 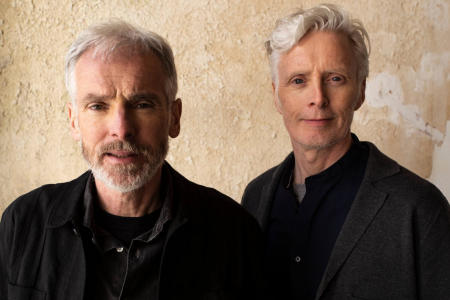 ‘Beach’ is the new single from Americana duo The County Affair, released on 17th June 2022 on X & Y Records

The single follows The County Affair’s 2021 debut album Off The Grid, recorded at Abbey Road Studios with veteran producer Tom Nichol, which has since racked up over 100,000 downloads and over 250,000 video views to-date.

The County Affair story was 30-years in the making for childhood best friends Kevin Brennan and Tony Regan. The pair met in Nottingham in the 1970s, travelling together on the same school bus each day. They talked endlessly about music and the ‘country rock’ and ‘outlaw country’ sounds that were emerging from the US at the time. “Our school friends were listening to The Clash or The Police,” says Kevin. “But Tony and I were much more interested in checking out Joe Ely, Waylon Kennings and Gram Parsons.”

As teenagers, the pair gigged together extensively thanks to Kevin’s Dad having an Irish Showband, for which there was huge demand in the ‘70s and ‘80s.

In their early twenties, Kevin and Tony decided to go travelling across America. Spending extended periods performing gigs in Texas, they soon became a household name within the wider Irish community, receiving glowing reviews from local press and radio.

Eventually landing in the thriving music scene of San Francisco, Tony and Kevin became sought after by venues across the city, sometimes playing up to four sets a night, four nights a week.

It wasn’t long before they were approached to sign to management and turn professional, but with post-graduate jobs waiting for both of them in the UK they both decided it was time to go home.

30 years later, married with families and successful careers under their belt, the duo decided in 2020 that the time was right to address what felt like unfinished business.

Kevin had been penning his own songs over the past decade and sent the demos to Tony, who tweaked the vocal and lyrical arrangements, adding chords here and there. Before they knew it, The County Affair was born.

Having made a few tracks available on Spotify, veteran songwriter-producer Tom Nichols heard Kevin on the radio talking about The County Affair. Tom liked what he heard and looked the band up. Kevin says, “Tom got in touch and very kindly offered to take us under his wings. We then went to Abbey Road studios to make what would become Off The Grid.”

Their new single nearly didn’t make it onto the album, though. “We’d actually finished the album,” Kevin explains. “I just sent Tom a demo of Beach, which is about love and a car crash – the perfect country combination – and he loved it so much that he insisted we work it up and put it on the album.”

Having recently completed a 20-date UK tour with Ward Thomas and performed at County 2 Country earlier this year at the O2 London, The County Affair will perform alongside the likes of Van Morrison and The Waterboys at Black Deer Festival later this weekend, and at September’s British Country Music Festival.

In addition, The County Affair will release a live album recorded at London’s Union Chapel on 15th July.