New To You… Jules Winchester 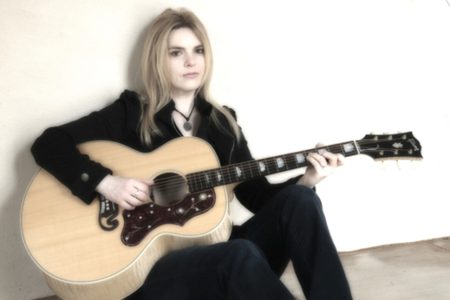 It is not often that respected professional musicians press me to interview someone who just released a first album-but that is what happened after Jules Winchester launched SOMETHING IN THOSE EYES, her debut album. The record is a joy, as has been widely recognised by the music press. Every track on it is strong and the album showcases perfectly the mellowness and range of Jules’s attractive voice, her talent for writing affecting lyrics with lilting melodies and her clever arrangements for acoustic and electric guitar plus keyboard. Jules, a young and energetic 39, has been writing songs and playing her guitars and keyboard for a quarter of a century. And for two decades she has been busily recording her work at her Sussex home. But it was not until 2009 when Jules met and started singing with Doris Brendel (of The Violet Hour and daughter of the world-renowned classical pianist Alfred Brendel) that her potential as a writer and performer was finally recognised. As Doris has recently commented, “If Jules had started playing live 20 years ago she would already be a household name.” Many others share that view. So, now that Jules is finally out there, performing live gigs and with her album promoted in the music magazines, it seemed timely to talk to her-as people were insisting I should.

We meet on a sunny summer’s day in the pretty tudor-style cottage near the sea in West Sussex which Jules shares with her husband, BMW technician Alan Winchester. “From a young age I always loved music,” Jules recalled. “My mother plays piano-she’s learning the clarinet and mandolin now-and my brother Neil played a bit of guitar, so there was a lot of music at home. The first tune my mother taught me on a battered old guitar we had was Elvis Presley’s Wooden Heart. My parents listened to Elvis but also to Glen Campbell, Connie Francis, John Denver, the Mamas and Papas plus Joe Brown. They still go to see Joe Brown whenever he is playing locally. He’s a great guitarist and really good to hear live. I have always liked The Pretenders and admire Chrissie Hynde but my own major influences were the American singers Tori Amos-who is classically trained and a brilliant pianist and songwriter-along with Tift Merritt, Allison Moorer plus Trisha Yearwood. I love anything with a good tune, nice harmonies and an interesting lyric.

One of my favourite songs is Dreaming Fields by Trisha Yearwood which is one of many beautiful compositions by American singer Matraca Berg. It’s a wonderful song that always reminds me of my grandparents who are no longer here…makes me reminisce. “By the time I was eight I’d had guitar lessons and was picking out tunes and singing along-I always had a good ear. Then I started to write songs and in my early teens I went to a nearby studio to record a song I’d written called Tears of Love. The local radio station-now Heart FM-played it but I was never able to persuade a record company to use the song. Later I bought a 4 track mixer and, with a guitar and a keyboard plus a recorder, I started putting my music together at home. Technically it was a challenge but I always persevered. I did Music ‘A’ level at school and gradually I taught myself how to do interesting arrangements, too. I kept adding to my recording equipment so after a while I could make quite good quality cds. “Then I had one of my songs-Walking Up The Aisle-recorded in Nashville.

Later I visited Memphis and Nashville but I still failed to get anyone interested in releasing the song. There were lots of rejections, but I never lost heart. All the time I was trying to perfect my song-writing, improve my arrangements-trying to keep it simple but interesting and memorable. I’d accumulated several guitars-a few acoustic guitars and a Fender Telecaster. But the thing I treasure most-apart from my husband! -is my Gibson guitar. All of this helped my recording work. Most of the time I just shared what I was doing with family and a few close friends. Everyone was very supportive, as they still are. At one point I did try singing and playing with a band but the others seemed more interested in making quick money; I just wanted to perfect the music. So I went back to recording on my own at home.” “Things finally changed in 2009 when I met Doris Brendel. Initially we were in touch through MySpace. Doris was making her album THE LAST ADVENTURE with guitarist and record producer Dave Beeson and she invited me to do some backing vocals. I found myself singing alongside professional performers like Aitch McRobbie, Lynne Butler and Julie Harrington. They made me so welcome and I learned such a lot from them…it was a really good experience.” Jules is too modest to tell me this, but Doris Brendel was very impressed with her. She suggested Jules record one of her compositions-The Book-professionally with Dave Beeson and Doris provided the backing vocals for Jules. This song now appears as the last track on Jules’s SOMETHING IN THOSE EYES album. Doris also encouraged Jules to start performing live in small venues. “I began performing in local clubs. There is one in Arundel and another in Pulborough that is run by Gary Holder, who is a friend of Herbie Flowers, the brilliant bass player. I was terrified at first but the audience reaction was really good. I remember singing Country Roads at Pulborough and suddenly the audience were all singing along and clapping and cheering at the end. People were coming up to shake my hand. I was overwhelmed…a wonderful experience to get that sort of reaction. But I have been lucky, audiences often respond really positively to me.”

Jules has now gained a lot more experience, playing live. She’s appeared at many Sussex venues including The Willows Folk Club, Findon Acoustic Club and The Way Out West Country Music Club. But Jules’s writing and performing ability transcends musical genres with ease and she is far more than just another US country-style singer. She now aims to progress to performing a broader range of her music and to playing bigger venues, including festivals. However she recognises that, as a solo act, this would be a challenge. “I’d like to meet some talented, good quality, committed musicians who I could work with regularly-but it isn’t easy and I suppose I am quite fussy,” Jules reflects. “I have done some other things, though. I played in a club in Malta which was different, but it went well. And I have performed at events like weddings. In 2011 three of my songs reached the semi-finals in different categories of the prestigious national UK Songwriting Competition-which I was really pleased about. I am also involved in a film project with film-maker Neil Winnington. He and I co-wrote a song called Cry of the Underclass which I recorded. It will open Neil’s film-though he is still seeking more finance for the project.” Jules has accumulated a big back catalogue from more than 20 years of non-stop writing and recording. This, with Jules’s steely determination to keep developing, innovating and striving for perfection in her music plus the recent release of SOMETHING IN THOSE EYES, her much-acclaimed first album, should ensure Jules at last achieves wider recognition as the original musical talent she clearly is. Nick Dent-Robinson