One to watch: Shane Profitt 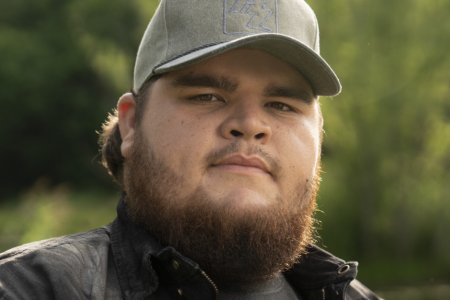 I picked up a guitar four years ago. At all of my family functions, everybody brings an instrument, because everybody plays, whether it be a banjo, a bass, guitar, anything. My Granddad asked me what I wanted for Christmas and because I was getting a little older in age, I started realising that Christmas wasn’t necessarily about presents. I told him that I just wanted to learn how to play guitar. That way, whenever we have these family functions, I’m not sitting in a corner of the room twiddling my thumbs, I could be involved. So he taught me three chords on the guitar, and I went online to learn the rest of the chords by myself. I stuck with it and within about six months of picking up a guitar, I had my first paying gig.

When you were little, what sort of music did your family make you listen to on long car journeys, and what are you choosing to listen to now?

I grew up around old school country, like Keith Whitley, Merle Haggard, Conway Twitty, stuff like that, just old, true to the core, country music. Now I have to say, as a songwriter, and an artist I’ve expanded what I listen to, I still listen to Keith Whitley and Merle Haggard, but I also listen to the Cadillac Three. I’m a huge fan of Chris Janson, because he has a huge part in all this and I still kind of lean more towards the new old school country, if that makes sense.

I’m glad that you mentioned Chris Janson there, can you tell me a little bit about how you guys first started working together?

I had to get strings for my guitar and nowhere in my little hometown sold them. So I had to make a 45-minute drive up towards Nashville to get them and I asked this girl if she wanted to go with me and I’d make a date out of it. I told her I’d take her out to eat and she agreed to it. So we go, I get the guitar strings and I come back out and I asked her what she wanted to eat. She said she wanted sushi, I’m not a fan of it, but I was a gentleman and I took her to eat sushi. When we got there, Chris Janson held the door for us. I had been to seven concerts my whole life and Chris Janson was five of the seven. So I’m freaking out, I’m kind of starstruck at that point. They seat us and I ended up asking the girl what I needed to order, she told me to try spicy tuna roll. So I ordered it, took one bite and spat it out in the napkin! I had all this time to think about how I was going to approach Chris. I had it in my mind that whenever I saw him stand up, that would be my cue to stand up and go and pay too. I saw him stand up, and I grabbed the ticket. We get walking across the restaurant floor and he sits right back down in this booth. I’m standing there awkward so I decided to go up to his table, and I introduced myself and I tell him what a fan I am, I tell him that I’m a songwriter and that it would mean the world to me, if he could listen to some of my music. Before he could even say anything, his wife, Kelly spoke up and she said, thank you for coming up, I’m his manager, I’m also a music publisher. Is that a receipt you’re holding in your hand? I can write my email down on the back of it and you can send me some songs, and I promise we will listen to them. I’m like, yes, ma’am, that would be great. Chris immediately looked up at me and said, did you just say, Yes, ma’am. I said, Yes, sir. He said, I like that a lot, pull up a chair and talk to me. Two weeks later, I was at work. I was the guy that cut the grass in the medians of the road and I hated my job. Chris was calling me at like 8.30 in the morning, and I was bush hogging grass. He said, I have this song idea called Real Bass Pro and I want to write it with you because I know you’re a big outdoorsman, can you get off work and come to Nashville? I called my boss immediately and he said, No, there’s too much work to do. So I knew that my lunch break was at 11 o’clock. So I asked Chris, if he would be okay with writing over FaceTime on my lunch break and he said yes. So, I had a couple of hours to think about this song idea. I wrote a chorus to the song, I had one hand on the steering wheel of a tractor, mowing and I had one hand on my phone, trying to write this song. 11 o’clock came, I parked underneath a big tree, and I propped the phone up on the steering wheel of the tractor and we finished writing Real Bass Pro. That was my first big cut.

Can you tell me the story behind ‘How It Oughta Be’?

When we sat down to write that song, I’d just quit my city job and I was broke. I had to go and get gas in my truck and gas was at its peak price. All the craziness was going on in the world and I just got to thinking to myself, it shouldn’t be like this, we should learn to love each other and not talk trash about each other, and I had the idea, it shouldn’t be like this so how should it be? I was very blessed and fortunate growing up, where my mum would cook supper almost every single night. And we would sit down at the table as a family, and have family dinner. In the song it says the world oughta try a piece of Mama’s chicken and feel the love around the table. I’m a firm believer that if everybody in today’s world had a little bit of that family life going on, that we would all be living in a whole lot better world than what we really are.

I would say probably my proudest moment to date would be the night that I stepped on the Ryman Auditorium stage. That so happens to be the night that I also got my record deal. I remember looking out in the crowd, and seeing my mum wipe away the tears from her eyes, all of my family was sitting there together and Scott Borchetta was there, the founder of Big Machine. I can honestly say that that was the first time that I actually felt like, I’ve made it. I think possibly November 1st could possibly top that because I get to play the Opry for the first time. And I’m really looking forward to that. I know there’s going to be a lot of tears shed.

When you’re on stage and you’re performing, are you completely focused? Or do you let your mind wander?

I do use it as a therapy session, I want everybody else to use it as that too. That’s the best thing about country music. When I step out on that stage, those people that are in the crowd, I don’t want them thinking about what they have going on at home. I just want them to completely clear their mind. Because we’re all there to have a good time. They paid their hard-earned money to be there and I know what that’s like, trust me. I want them to use that as their stepping stone for their worries and problems. Because that’s the best thing about music, I always use it to clear my mind. So that’s what I want people to get from Shane Profitt.

What’s next for you and do you have any plans to visit the UK?

I would absolutely love to come to the UK. Up until I got my record deal and I went out on tour with Chris, I had only ever been to four states here in the US and now I’ve been to 43! So getting to travel and see all these different things and meet all these different people, there’s so much to learn and absorb just outside of where I live. I’m very thankful that music allows me to do all these amazing things.