Ones to watch at C2C 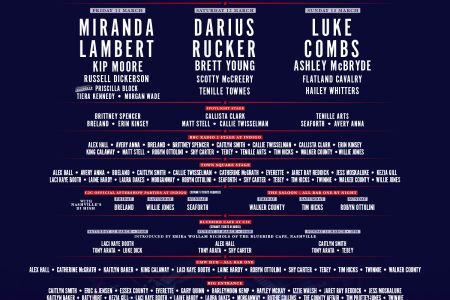 C2C have confirmed the full complete line up of festival stages across The O2, London featuring over 100 performances across the weekend.  C2C provides an incredible opportunity for fans of country to discover and support new artists from all over the UK, Europe and the US.  C2C ticket holders will have access to The Town Square, The Big Entrance, BBC Radio 2 Stage (at Indigo at The O2), Country Music Week Hub and The Saloon (All Bar One), The Icon Stage and The Garden Stage.

It’s going to be a busy weekend with you feeling like you need to split yourself in two so as not to miss any of your favourite artists! However, we’ve got you covered as we highlight a couple of key, not-to-be-missed performances from each stage.

Willie Jones – This is such a packed line-up that it was hard to narrow down but Willie Jones seriously impressed me in 2019 at the Music City Cares concert which featured Carly Pearce and Rodney Atkins. Right now I’m really enjoying ‘American Dream’ a song he released just over a year ago now. He’s a versatile performer and definitely one not to be missed.

Callista Clark – Our cover star from the last issue has some great songs and a phenomenal voice, she also plays eight instruments! She may be young but she will own that stage and captivate the room. The song I’m most enjoying right now is ‘Real To Me’.

Seaforth – These boys are so much fun and have some really catchy songs. All the way from Australia, the duo have brought their own flavour to the Nashville scene and have teamed up well with other artists and writers. The song they’ve done with Jordan Davis, ‘Good Beer’ is a standout.

Kezia Gill – Kezia is one of the fastest rising stars of the UK scene. Recently named Entertainer of the Year at the British Country Music Association awards, Kezia’s power-house vocals will reel you in on first listen and her live performance will most certainly impress. ‘Whiskey Drinkin Woman’ is my song of choice.

Shy Carter – There are plenty of chances to see this hitmaker throughout the weekend but take as many of those chances as you can because he is a real gem! I’m hoping and praying with all my heart that he’ll play ‘Speak to a Girl’ a song he wrote that featured on Tim McGraw and Faith Hill’s album along with ‘Stuck Like Glue’ a hit he penned for Sugarland. However, listen out for some amazing new material from Carter because his new record is brilliant!

Laci Kaye Booth – Texas native, Laci Kaye Booth rose to fame through American Idol but has since impressed the Nashville community, regularly writing with the likes of Laura Veltz and Jimmy Robbins. Her song ‘Shuffle’ is a great tune.

Harleymoon Kemp – Daughter of Martin Kemp, music runs in the family for Harleymoon Kemp and she was always destined to excel at it. She’s bound to impress at C2C. ‘Love On The Radio’ is probably my favourite track of hers.

The County Affair – This duo have a lovely story about friends reunited and the EP that they released last year is a standout on the UK scene. I’m excited to see these songs performed live. ‘Every Ghost’ is definitely worth a listen.

Katy Hurt – It’s no secret that I’m a big fan of Katy Hurt, I just think she’s one of the brightest stars in the UK scene right now. ‘Sounds Good In A Bar’ was released last year and I think it’s one of the best songs she’s released.

Kaitlyn Baker – Kaitlyn Baker is a really talented artist and has opened for the likes of Craig Morgan and Jim Lauderdale. Dubbed the new coal miner’s daughter due to her family’s background, her songwriting speaks directly to the hearts of ordinary people. ‘Drinkin’ Hours’ is my go-to track of Kaitlyn’s.

Jess Moskaluke – Jess brought out a wonderful album last year called ‘The Demos’ which featured songs she’d co-written with some Nashville hit-makers such as Liz Rose and Corey Crowder and they deserved to be hits themselves – there was some fabulous songwriting on there. The Canadian will be one of the most talked about artists on these outer stages I am sure. Chosen song – ‘Mapdot’.

Eric & Jensen – Eric and Jensen are the new kids on the block of the UK country scene. The two brothers are just starting out on their journey but have some covers on youtube that really showcase their vocal talents. I’m really excited to see what they’ll bring to the table in a live setting but for now, listen to ‘Don’t Do Me Like That’.

There are a lot of talented musicians from all around the world on this line up which is great to see. Someone I’ve never heard of usually catches my attention and takes me by surprise which is the magic of C2C. Make sure you keep your ears open and soak in as much live music as possible in the day!