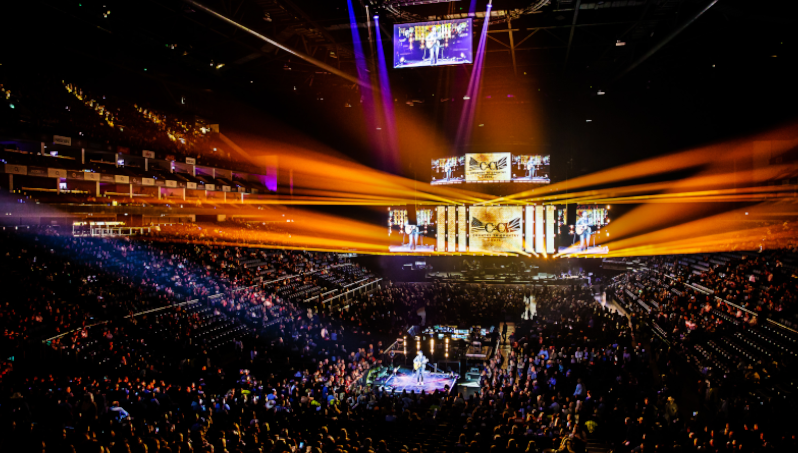 Now in its seventh incarnation, C2C will be returning to London’s O2 Arena, The SSE Arena in Glasgow and Dublin’s 3Arena between March 13-15 to showcase some of the best that country music has to offer

The growth of country music in the UK has been nothing short of extraordinary over the last decade and the progress of that is always captured by Country to Country Festival, which becomes more popular with each year.

Last year, C2C set a new record in terms of footfall, with over 60,000 people attending the festival over the course of the three days and even despite corona virus fears, it is very much expected that figure will be topped this year with yet another stellar line-up.

The rest of the line-up is also chock full of quality, with Grammy Award winning artists Tanya Tucker and Old Crow Medicine Show gracing the Main Stage. Sadly, two-time CMA Award Vocal Group of the Year winners Old Dominion pulled out of their sub-headline slot, but they have been replaced swiftly with The Shires, who have become the first UK act to be booked for the Main Stage at C2C.

Meanwhile, the likes of The Cadillac Three, Brett Young, Jordan Davis, Runaway June, Charles Esten, Abby Anderson, Tenille Townes and Eric Paslay will be joining them on the biggest platform at C2C, making for an outrageous level of talent spread out across the three days.

Those Main Stage acts will be flanked by nine very talented performers on the Spotlight Stage, who are made up of ‘the next Carrie Underwood’ in Gabby Barrett, the controversial but hugely popular country-rap artist Willie Jones and Mitchell Tenpenny among others.

The only UK act on the Spotlight Stage will be Twinnie, while Caylee Hammock, Noah Schnacky, Kassi Ashton, Niko Moon and Kyle Daniel will all perform 15-minute segments in-between Main Stage acts.

Getting the most out of your ticket

Some of those Spotlight Stage acts will be performing other sets over the course of the weekend, most of which will be taking place on other stages that you need either a one-off wristband for or your C2C ticket. Some of these stages are subject to availability, so make sure you allow plenty of time if there’s an artist that you want to see in a small capacity room.

Artists like Ashton, Daniel, Barrett, Tenpenny, Schnacky, Hammack and Jones will all be performing in the 2000 capacity indigo along with people like Filmore, Tebey, A Thousand Horses and Tenille Arts, all of which are set to be hugely popular events.

The only other Spotlight Stage act yet to be mentioned for other shows so far is Twinnie, who will also be performing in the CMW Hub at the top floor of All Bar One. For this venue in particular, make sure you are there way ahead of time as it is capped at about 100 people (or so it feels), but the intimacy of the performances on hand make them borderline unmissable.

Joining Twinnie on that stage will be Austin Jenckes, Moon, Kylie Morgan, Leslie Stevens and Alex Hall, while Catherine McGrath, Schnacky and Arts will also be present for some C2C magic.

The magic behind the track

C2C doesn’t technically start on the Friday, though – it actually kicks off on the Thursday before with the CMA Songwriters Series, which takes place in indigo inside the O2 Arena.

The Songwriters Series has proved pivotal for a number of artists from across the pond, including the likes of Combs, Maren Morris, Brandy Clark, Jimmie Allen and Travis Denning – all of whom made their first ever UK appearance at the Songwriters Series to get the C2C ball rolling.

This year, the line-up is once again brilliant as it not only includes Jaren Johnson from The Cadillac Three and Niko Moon, but also Tenille Townes, Caylee Hammack and Phil Barton.

Hillary Lindsey, Lori McKenna and Liz Rose, who are dubbed the Love Junkies in Nashville, were initially pencilled in for the event, but unfortunately pulled out.

One of the best things about C2C though is the community element to it – you don’t actually need a ticket to get involved with the festival, as there is a lot of free music available to indulge in.

The Big Entrance Stage is available to you as you walk into the O2 on the right hand side, while up the escalators on the left is the Icon Stage – both of which are displaying a host of excellent artists that you can see free of charge.

These include the likes of Temecula Road, who recently made their Grand Ole Opry debut, The Luck, Una Healy, Laura Oakes and Kaitlyn Baker – but the free stuff doesn’t just stop there.

This year, C2C is introducing a new area in the shape of the Garden Stage, which is going to be a hot destination for those without a ticket as some of the artists on that stage are very notable in terms of profile.

The likes of Catherine McGrath, Austin Jenckes, Holloway Road, Katy Hurt and The Remedy Club will be making appearances on that stage, along with Danny Burns, Danny McMahon, Hayley McKay, Lucy Grubb and Izzie Walsh.

Much like previous years, there will be performances after the headliner has finished, which will take place in indigo and All Bar One’s top floor once more, which transforms into The Saloon after those final few notes ring out.

Spotlight Stage artists Tenpenny, Ashton and Jones will all perform in indigo on Friday, Saturday and Sunday respectively for London – along with Nashville’s DJ Hish – while over in The Saloon, Kyle Daniel, A Thousand Horses and Robert Counts will be doing their bit to keep you going through the night.

You do need separate tickets to go to the indigo shows, but for the gigs in The Saloon, your C2C ticket will be enough to get you in – just bear in mind that you may have to get there fairly swiftly due to capacity logistics.

Also, if you want some time away from music, C2C ticket holders and wristband users can see special screenings of ‘Bluebird’ in the Cineworld on Saturday and Sunday, which is all about the Bluebird Café in Nashville and discusses some of the origin stories of huge artists who made their name in that special room.

C2C is a very special time of the year for country music fans and there is no doubt 2020 will live up to expectation – and we can’t wait for it to get started.