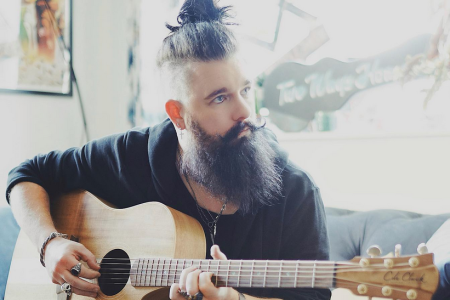 Written by Matt Spracklen over 10 years ago, Bad Dream was released by punk rock band Best Of Enemies who Matt was the guitarist for at the time. The song is an insight into what was one of the hardest times of Matt’s life and a theme of abandonment is rife throughout. Now the song is retrospective but since the world was hit by a global pandemic and thrown into lockdown, Spracklen decided it would be a good time to re-record the song again in the way it was first penned as these feelings will ring true for so many suffering with mental health and the struggles of being alone in a global pandemic.
“I wrote Bad Dream one morning after waking up and realising a cliche. I hadn’t just had a bad dream. I was in one. I was reliving a misspent youth to deal with a breakup and had a hazy lack of direction. I had my band, a bus and I’d wake up to a house full of friends but after a period of abstaining from alcohol, I found it was actually helping me deal with everything.
I was writing songs to process it all.”
Bad Dream was recorded, produced and mixed at Summerland Studio and Big Fig Studio by Lewis Fowler, Jake Stanton and Michael Clancy. Pedal steel was provided by Joe Harvey White. It has a hauntingly honest sound, which reflects the sentiment of the lyrics.
“I guess it’s a punk song but it’s country music, right? This is how I wrote it. Some may call it Americana. Maybe I’ll just call it Punktry.”