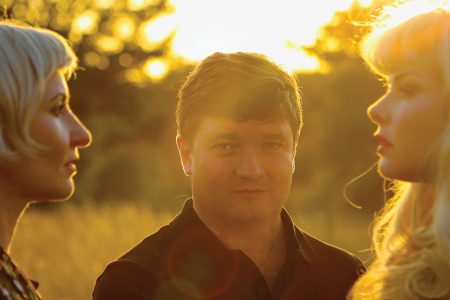 Award-winning trio Red Sky July are delighted to announce the release of VOYAGER on September 16th 2016. VOYAGER is a short collection of new songs, a sister release to the band’s March 2016 full-length studio record THE TRUTH AND THE LIE . The album is now available to pre-order from iTunes.
Reflecting on the release of their third album in March, Red Sky July – Shelly Poole (Alisha’s Attic), Ally McErlaine (Texas) and Charity Hair (The Alice Band) – felt there were still more stories in THE TRUTH AND THE LIE to tell. “The album felt like it needed a sister for some reason, we are always working in the studio on new material and we just felt like the story of The Truth and The Lie had more layers to it”, explains Shelly.
The six tracks on VOYAGER have the signature Red Sky July sound, a hazy blend of Americana and alt-country with delicate female harmonies and first-rate musicianship – Shelly on vocals and keys, Ally on guitar, Charity on vocals and fiddle with additional steel peddle from Mark Neary.
The mini-album was recorded and produced in the band’s garden studio in north London, putting their personal stamp on every aspect of the creative process. The carefully crafted compositions are both considered and personal, “Our life as a band has always had a story, what with Ally’s recovery (from a brain aneurysm in 2009) and it does feel like a journey sometimes… hence VOYAGER”, says Shelly.
Opening track, House Of Cards, with its brooding harmonies and fractured melody is about a relationship teetering on the brink of death, a partner pushing too far. The playful 1972 Onwards is Shelly’s mini-biography, “We’ve decided we are going to write our mini life stories on each b-side or sister record from now on”, jokes Shelly, “this is mine, it starts with love, religion and dreams and ends with Prince of course!” ‘Like My Man’ – written with Kimmie Rhodes and Beth Nielsen Chapman at Glastonbury – took the trio out of the studio and onto Hampstead Heath. The track’s vocals were recorded past midnight on a laptop and SM58 speakers, “just to get into that sad, sitting up late, missing someone vibe” remarks Shelly.
What Are We Doing Here is the band’s ‘killer divorce song’, originally written with Jack Savoretti in mind with friend Beth Nielsen Chapman, who is regular guest in Red Sky July’s studio. The title track, Voyager was written in one sunny afternoon while the band was in a wistful mood. “It happened so quickly it just fell out of our heads”, exclaims Shelly, “It’s a song about the best kind of love – a romance you can’t keep but will hold on to forever and it will hurt but in a great way.” Closing track The Longest Time, started as a composition sent to the trio by Paul Statham a few years ago, and Paul produced this final, revamped version. The band had free reign to take the song where they pleased, Ally added guitars and Charity the harmonies. The track is a love letter, as Shelly explains, “telling someone you love them in song for you can’t in the flesh”.
The band have dominated the UK Country Chart, been playlisted on BBC Radio 2, and have supported artists such as Steve Earle, Sheryl Crow, 10CC, Tom Jones and Jools Holland. Festivals they have performed at include Glastonbury, T in the Park, Cornbury and Isle of Wight. Red Sky July’s impressive achievements were recognised at the Scottish Music Awards where they were presented with a prestigious Tartan Clef award by Nordoff-Robbins Music Therapy.
Available to pre-order now
VOYAGER launch show – Bush Hall, London – September 19th 2016 – Tickets