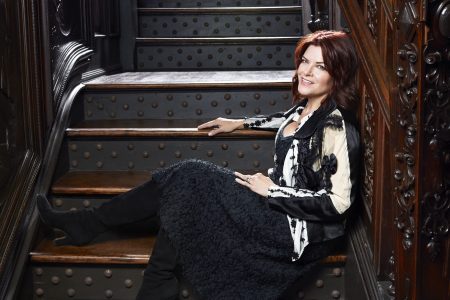 Support for the evening came from Winter Mountain, a new name to me. The duo hail from Donegal, Ireland and Cornwall, respectively, having met of all places on a train southbound from Chicago to Memphis. As the lead singer put it, they’ve been making music ever since. Taking us through some existing and some new material, they demonstrated some fabulous harmonies, especially on such songs as: The Soldier’s Ghost, Wherever You Lay Your Head Down and Sarah.

As Rosanne Cash and her partner/husband John Leventhal took to the Stage of Hall 2, it stuck me how lucky we were to be seeing Rosanne in this intimate environment, second time around. Clearly starting as she intended to continue, they launched straight into Dreams Are Not My Home, followed by the John Hiatt song It Hasn’t Happened Yet.” A stirring version of Radio Operator” followed, after she told us a little of the background. It is about her parents and in 1954, her mother was ‘the girl from San Antone.’ She then admitted that her daughter, Caitlin bears more resemblance to the girl her mother was than she does; it does, they say, skip a generation. The World Unseen followed, with John providing simple but exquisite guitar accompaniment; talk about intuitive musicianship, as Rosanne delivered the most poignant line of the evening: ‘I am the list of everyone I have to lose.’ I’m sure Johnny Cash and June Carter Cash flashed through everyone’s minds, if only for a moment.

Mr L stepped into The Boss’-aka Springsteen’s shoes to sing his part on the duet they recorded for THE LIST; Don Gibson’s 1961 hit, Sea Of Heartbreak. As he did so, he joked: “I am not Bruce and I hope the Boss never shows up..!” Maybe not the boss but I think anyone proficient in gang speak, present, would agree that he was da boss! I also loved how Rosanne faded out the song at the end, by simply moving further away from the microphone. What a great effect. Also from THE LIST, Long Black Veil received massive applause; something about the way she delivers it just gets under your skin, almost like she becomes that ghost, telling you the sad, sad story. As John played the final bars of the song, Rosanne quipped: “I do like a good ghost story in a country song.” Another song which now seems particularly poignant when she sings it is Motherless Children. You can’t help but feel that at least some of those lines come from personal experience.

Movin’ On, the song of the same title followed, before Rosanne acknowledged Winter Mountain, her support act, thanking them for their set. September When It Comes,” was more than worth the wait; probably the best I have heard Rosanne sing this. Again, it can’t escape many people’s attention that this was originally recorded as a duet with her father, who then passed away in September. I have an inkling his spirit was right there in that room during that song. Tom Petty’s Never Be You” was followed by an odd request for requests. Asking us to shout for songs we’d like to hear, she responded with either a reason why not, or that it was already in the set-list but they’d get to it soon. Perhaps this was all a ruse to allow some wit as she teased us: “Since you lot don’t know what you want, we’ll play…” before taking us into blues for a great performance of Burn Down This Town.

Someone’s special request did earn us a treat in the form of John Leventhal becoming ‘the little black-haired boy who played the Tennessee Flat Top Box.’ How he plays or Rosanne sings quite that fast, is literally beyond me. Another of her classics delighted the audience; Seven Year Ache sounds even better live than I ever expected; if you close your eyes it is apparent that other than a few lower notes, Rosanne’s voice has remained pretty much unchanged, allowing her to take us back in time for the few minutes of the song. In a touching moment, Rosanne thanked us as well as The Sage for inviting her back, before adding: “This place is amazing; it really is one of the very best venues in the world.” High praise indeed. Of course, we already know that but it’s nice to hear it from those who stand on the stages.

Heartaches By The Number became an impromptu sing along with which they closed the set, thanking us again and assuring us we “are a good lookin’ bunch,” as the house lights came up. No way was The Sage letting Rosanne Cash leave it at that and a standing ovation prompted an encore; somewhat fittingly, she opted to send us into the Gateshead night with a beautiful delivery of “…one of the most classic American songs; 500 Miles.” This choice of song got me thinking that it had been incredible that Rosanne played The Sage once, but to have the chance to be not 500 miles but mere feet away a second time was more than I think many of us dare hoped for. So, thank you to not only Rosanne and John but The Sage, for making another dream come true for many. Again. If I may be as bold as to hope it happens a third time, Rosanne, please don’t leave us waiting with a Seven Year Ache!