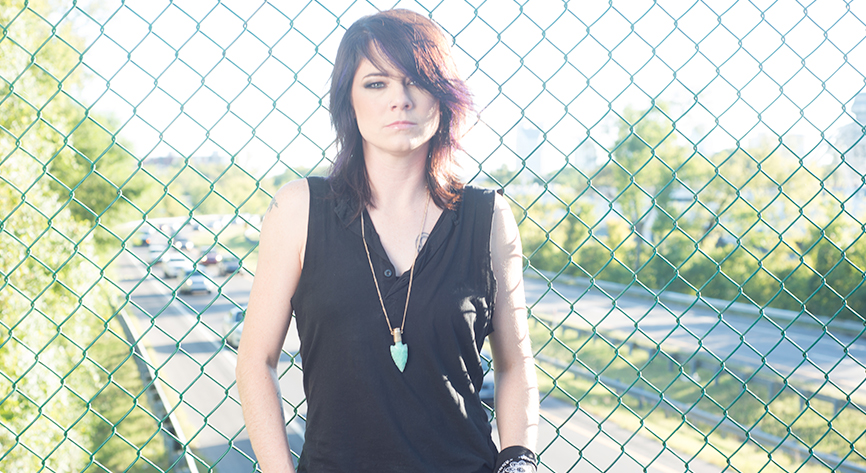 Sonia Leigh moved around frequently throughout her childhood, spending time in five states across the Bible Belt and Midwest. This filled her early life with changing scenery and half-packed moving boxes. Throughout, though, music remained a constant presence.

“Growing up, my dad played music,” Sonia told Curve magazine, “He was a writer, and I’d listen to his songs that he wrote and I’d steal his guitar. As soon as I learned a few chords and I could change them fast enough, I started writing songs too.”

Sonia became colored in many genres of music along her way. Influenced at a young age by her grandfather singing Hank Williams songs at family gatherings, soaking up her father’s own writing and record collection. It’s no surprise to mention her mothers classic rock favorites crept in and held a major roll in shaping her talents. In her early teens, the angst of the then-emerging grunge scene immediately set fire to a brand new trail and opened up a whole new world for Sonia’s musical wanderlust . Naturally, Sonia drew on every influence when she began writing and performing her own material, which she’s done since she began dreaming up her own songs in her bedroom. Along the way, this shape shifting singer-songwriter has honed both her craft and evolved her own genre-crossing style.

“I grew up listening to country music with my Dad,” Sonia remembers, “but rock slowly became one of the biggest parts of the picture. I just loved it all, and I wanted to play it all. I was never someone who wanted to play only one style. I just wanted to play music.”

Sonia’s passion for music transcends genres’ boxed-in boundaries, enabling her to maintain an expressive individuality, with energy and edge. She’s toured across the world with the likes of Melissa Etheridge, Zac Brown Band, Eric Church, and country legends such as Willie Nelson and Loretta Lynn. Back in her adopted hometown of Nashville, she’s become a popular songwriter on Music Row, with a pair of #1 hits to her name: Zac Brown Band’s ‘Goodbye in Her Eyes’ and ‘Sweet Annie’ (both featured on the Grammy-winning album ‘Uncaged’). Sonia Leigh has earned a reputation as a songwriter who stretches country music far beyond its traditional limits.

Now, continuing to develop her solo career, working with new sounds, collaborators, and jumping genre boundaries with ease. Sonia is drawing in and on everything from pop. hip hop melodies and country storytelling to the no-rules spirit of grunge, combined with the energy of rock & roll. Catchy hooks and clever lyrics are Sonia Leigh’s trademarks.

Her 11-track studio album ‘Sonia Leigh and Friends: Studio 3 Sessions’ shows an organic, honest, and raw approach. Recorded at the iconic Abbey Road Studios Sonia collaborates with hand selected UK musicians/artists including, James Tranter, James Dudley and Luke Davis from Broken Witt Rebels, sprinkled with a collection of surprise cameo’s.  From the smokey vocals and catapulting guitar’s on ‘Jack is Back’ to the upbeat classic rock nod of ‘Alabama Bound’ and the witty, worldly-wise lyrics of ‘My Name is Money’, there are many gems on Sonia Leigh’s latest effort. Surprises such as a beautiful piano rendition of Claude Debussy’s ‘Clair de Lune’ and a never before recorded version of her penned number one hit for Zac Brown Band “Sweet Annie”.  including a Tom Wait’s group sing along coupled with some brand new songs. There is something for everyone here.

Sonia is most excited to pair up and work closely with Supa Jam a new music program that allows children and young adults from all back grounds in the UK to learn their musical path, with guidance from expert mentors in the industry.  She will be headlining the Supa Jam stage at The Black Deer Festival  Friday, 22nd June. You can also catch her pregame show Thursday, 21st June at the Hertford Corn Exchange. Check her website sonialeigh.com for info and don’t miss your chance to see this one of kind live.

‘Sonia Leigh and Friends: Studio 3 Sessions ‘ is available now for pre-order on iTunes and due to release on 15th June, 2018.