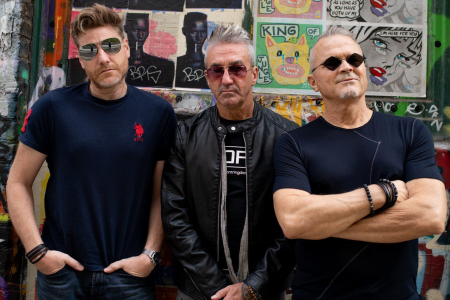 When did you first know you wanted a career in music?

Dorian:  When I was 14 years old I started a band with school friends and we did a small concert at our school auditorium for Talent Day at the end of the school year, we played Alice Cooper’s School’s Out  and the place went crazy and that’s when the music bug really  bit me I guess. Years of practice later and here we are!

Adam: When I was just 10 years old, I remember  mum and dad had a singing duo act in Liverpool in the sixties around the time of The Beatles and, in fact, my parent’s duo group on more than one occasion played the same clubs. With both parents singers, well, wouldn’t you know, I found a could carry a tune and I’ve been in music ever since.

How did you guys first meet?

Dorian:  I had just moved to Spain with my family in 2017 and I was looking for a band to join, I saw Adam singing in a cover band at a club on the Costa Blanca of Spain and I thought “That’d be a good band to join if only there was an opening”, luckily for me, the guitarist in the band left to return home to the UK and, through a friend, I was put in touch with Adam and soon I joined his cover band which ultimately resulted in Aliens Don’t Ring Doorbells.

What kind of music did you grow up listening to?

Dorian: I’m a guitarist so I’ve always been drawn to guitar driven music whether it’s classic rock, jazz or fusion but at the same time I love melody and harmony so I listened a lot to the Beatles, Styx, Kansas, Supertramp, Return to Forever to name just a few.

Adam:  As a singer, I am always drawn to great melodies and great vocalists; I listened to a lot of pop growing up like Simon & Garfunkel, Take That and many others along these lines. I must admit I’m a pop Fan, but I truly love all music that I can sing along to and join in with.

Who within the country music genre influenced or inspired you?

Dorian: Musically, I would say Johnny Hiland is a great influence on me and I use a few licks I’ve learned from him; he’s really great. In terms of a vocal type band I would definitely site the band Alabama has a strong influence.

Can you talk me through your songwriting process, do you like to start with a lyric or melody or is it different every time?

Dorian: Always a great question because everybody does it differently, for example, when I write I like to see what can be done to make the song interesting. There are a number of ingredients you can start with: rhythm, melody, chord movements/harmony. I find a lot of current music is too rhythm driven often at the expense of melody and harmony.  What’s interesting to me is to use rhythmic hooks along with more harmonic movement. Once I have the essence of the song (harmony and rhythm), I then look at all the chord movements and within these chords of course are individual notes from which I create a melody. I often sit with Adam as we fine tune words and melody to ensure we both are happy

Adam: When I write songs for Aliens I often picture a song in my head as a series of pictures to which I sing a melody line into the voice memo on my phone.  Once I bring this to Dorian and the rest of the band the process of developing the song becomes a joint effort.

Country music is all about storytelling, can you tell me the story behind Hello 2 You?

Adam: The song Hello 2 You was written at a time when my family and I were going through a challenging time with health issues. The song is about never giving up and believing in yourself such that no matter what your age, you can rediscover a new part of you that can make all the difference.

Adam:  I think our song ‘It’s Your Night’ was strange in the sense that it is written about an alien encounter between two species on an unknown planet who somehow find each other. We tried to get this message across in the It’s Your Night music video and people generally agree it’s a strange but cool music video.

Dorian:  We toured the UK and Europe in 2022 and now we are very busy working on our second album which will be released in March 2023.  We have just release the first EP from the new album with the single ‘Hello 2 You’ and the b-side song ‘Don’t Touch’; both are seeing good airplay in the UK, Europe and the USA. This is very important for us as it sets the groundwork for our hoped for tour of the USA in 2023 for the first time so there’s lots to look forward to with the Aliens!