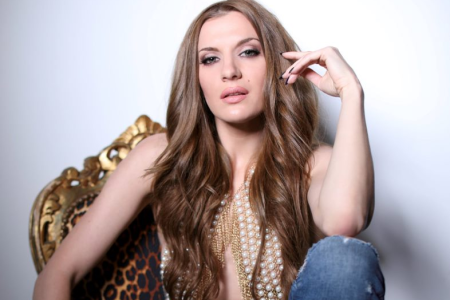 I always knew I wanted to be a singer. I basically came out of the womb doing jazz hands and Fosse choreography. But I credit Robbie Williams for inspiring me to become a songwriter and musician. I spent a lot of time in Europe during my childhood. A European friend of mine gave me all of Robbie’s CDs as a present, and I was instantly obsessed. I was already such a fan of his voice and style, but then when I found out that he (along with Guy Chambers) wrote all of his own music, I was inspired to do the same.

How has your work with Postmodern Jukebox influenced your solo career?

Touring around the world with Postmodern Jukebox inspired me to become a burlesque performer. I began my career as a jazz cabaret singer, performing in long slinky dresses in upscale nightclubs, singing Sinatra and Peggy Lee. When I began performing with PMJ, I went from playing 50 seat nightclubs in Los Angeles to touring the entire world, becoming immersed in the cultures we were visiting.

When we toured Paris, my life as a songwriter changed forever. The Crazy Horse cabaret had featured some of our music in their show, and as such, they came to see us perform at the Olympia. We all made friends with the dancers and came to see their show on our off night. I ignorantly didn’t even realize that the burlesque and French cabaret world was still alive. The Crazy Horse show was the most beautiful thing I had ever seen and fell immediately in love with the burlesque world. From then on, the sounds and imagery of burlesque would heavily inspire my solo career and life as a songwriter.

Country music is all about storytelling, can you tell me about your songwriting process and, where you draw inspiration from lyrically?

I love country music for this very reason! Lyrics are everything to me, I’m honestly just a poet who knows how to play piano, and that’s how I became a musician. Every song I write begins with lyrics, and those lyrics are always about love. But, strangely, I don’t write love songs…at least, no happy ones. The love songs I write are mostly along the lines of “I love you, but I’m leaving you”… “I love you but you’re gay” … “I love you but I’m gay” “I love you despite your recreational coke habit…”  you get the idea.

Can you tell me the story behind your song ‘What Do You Wanna Know’?

There was one week during the pandemic that I was, for personal reasons, in a very dark place. I felt entirely hopeless, and thought my life as I knew it was over. I couldn’t get out of bed. My boyfriend was trying to console me, asking me to talk about what was going on in my head. I told him what would eventually become the lyrics to the song… “what do you wanna know, how I’m 34 and I can’t get my shit together? That I’m old enough to be someone’s mother and I’m terrified?”

I went upstairs to my studio and wrote the song in 20 minutes.

What can you tell me about your new album ‘DRAMA’, who have you been working with on that?

The album is called DRAMA. It’s an operatic pop rock album, inspired by the glamorous alt rockers I grew up listening to, Bowie, Queen, Annie Lennox, Peter Gabriel…artists who didn’t just sing the songs they wrote but acted them out with dazzling, cabaret like imagery and Shakespearian theatricality.

I wrote all of the music myself, and this album is my most emotional. The big, dramatic emotions I was feeling when I wrote them needed big, anthemic, over the top productions to do them justice.

I grew up in a convent Catholic school, and as a result was very afraid of exploring romance and sexuality, for fear of God’s judgement. I didn’t have a boyfriend until I was almost in my 20s, and didn’t have a girlfriend until long after that. The music on this record reflects a time in my life where I was finally allowing myself to explore these aspects of my romantic self for the first time, and after having it locked inside for so long, this record and its flood of emotional turmoil was the result.

Steve Power, my dear long-time friend, produced the single, featuring Adele’s brilliant guitarist Tim Van Der Kuil on guitar. Mark Portmann produced the rest of the record, and it features yet another guitar legend Tim Pierce as well as my beloved Paul Bushnell on bass. I am so lucky to have had these geniuses all lend their talents for this album, they sound fucking brilliant.

A few silly questions for you now, what’s the strangest thing you’ve ever written a song about?

I wrote a burlesque song called “My big, long weenie”, a love song to my sausage dog, Ludwig. It is, of course, a masterpiece.

When you’re on stage are you completely focused or do you let your mind wander, we call it your mid-gig thoughts?

Laser focused but also…depends on what catering brought for post-show food. If there’s a gluten free brownie in there, don’t expect the performance of a lifetime.

What’s been your proudest moment so far in your career?

When I met Guy Chambers for the first time, and he told me he loved my original music. He and Robbie Williams are my favourite living songwriters. When someone you have idolized since you were 15 years old loves your music, it is the most incredible feeling in the world. And now to be working with my dear friend Steve Power, whose work as a producer I have worshipped for decades, is a real dream come true.