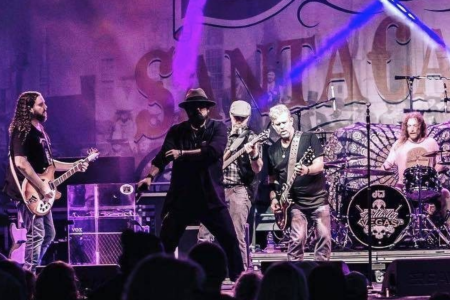 Hillbilly Vegas, with their blend of Southern Rock and Outlaw Country, have a string of Billboard top 20 Rock singles under their belt and headline festivals in their home country. Now, with a new album on the way, ‘The Great Southern Hustle’, Hillbilly Vegas will make their live debut as they play a show at The Troubadour in London, a venue where Bob Dylan, Jimi Hendrix, Jimmy Page & Robert Plant, Paul Simon, Elvis Costello, Ed Sheeran & Adele made their mark. Steve Harris, lead vocalist of the band, filled me in on how it all began.

Since this is our first time connecting, can you tell me about the formation of Hillbilly Vegas please?

We weren’t a band. We were just hanging out at Johnny’s house out in the country playing songs and telling stories. It was just for fun but pretty soon we were writing songs and the truth is…if you put a a bunch of musicians in a room they’ll eventually start a band. We did and here we are.

Who were your earliest influences when you were growing up?

Honestly, 70s rock along with the early Outlaw country stuff. In my opinion, it’s the greatest era of music ever. For me personally it was Paul Rodgers, Glenn Hughes and taking a weird left turn in there somewhere Hank Jr, Lynyrd Skynyrd, Charlie Daniels and Waylon Jennings.

Can you tell me about the process for writing and recording the new record ‘The Great Southern Hustle’?

This is our favourite part. The creation. These songs are our lives.  We are story tellers first. Each song is about us, maybe someone in our lives or just personal observations.  It’s all 100% us. As for the recording process most of the record was done with Alex Gerst at Empire Sound in Dallas. It’s our home away from home. Our producer for the record is also our Keyboardist Geraldo Dominelli. Geraldo is so in tune with our sound and who we are. He makes these songs sound like us. Believe it or not, that’s not always a given. We’ve worked with people early in our career that took our personality away and created something we didn’t even recognise. We promised ourselves we would never let that happen again. So being in control from writing to the finished recording is our process.