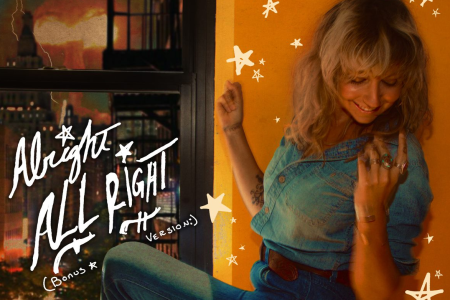 I think the idea that I would love to sing in a band first starting formulating in my head in my early 20’s, but I certainly didn’t think I could or would be playing an instrument, let alone writing my own songs… I went to a christian school my whole life through high school, so youth group was a big part of life, and I had learned some basic guitar chords at various retreats, but never really played played, and once I moved away I kind of forgot about it.

It wasn’t until after a breakup with a musician, that really tore me up, that I was inspired to pick up my brother’s guitar (we were roommates in NYC at the time) and write him a song, that I realised this is exactly what I wanted to be doing with my love. It was like this lightning bolt that came out of nowhere, and I was just struck with mad inspiration and was obsessed with writing and learning to play guitar and singing and making something of myself out of it.

Growing up, what did your family play to you on long car journeys and what are you choosing to listen to now?

I’m sorry to say on long car rides we usually brought a little TV with a VCR attached and set it up in the front of the van! I’m the oldest of seven kids and keeping us all engaged on that TV on long car rides was paramount to my parent’s sanity…This being said… We of course did listen to music in the car. On the rides to school, we always listened to the Golden Oldies station, Fox 97. That was my favourite music (and still is). I had a little alarm clock radio, and I would wake up to it every morning, and that’s what I would play when I came home from school.

My dad loved Patsy Cline, Kris Kristofferson, Elvis and Johnny Cash, so we listened to that when I was in the car with him, and that’s where I acquired my love of classic country music. When I’m on long road trips I tend to listen to a lot of Tom Petty (he’s my favourite) and the Highwaymen. The Highwaymen is great driving music (so is Petty). The album Wildflowers will never get old.

Tell me about your songwriting process, do you like to start with a lyric or melody or is it different every time?

I almost always write the melody and lyrics at the same time… All of the lyrics don’t always come at the same time, but the first lines and melody come together, along with the syllabic phrasing…California and Darlin were both written in one sitting just going straight through with the lyrics and melody. I’ve never written lyrics that I then put to a melody, though I’m not opposed, it just doesn’t come that way to me, though, I’ve found my inspiration comes from my emotions, particularly emotions that I feel so strongly or deeply that the only thing I know to do with myself to work through them is write.

The entire Darlin’ album was inspired in this way. From a situation I was in, usually some kind of matter of the heart, and I needed to write a song to a person to express how I was feeling…now whether or not they ever heard the song wasn’t the point, it was a way for me to work through it.

Tell me the story behind your song ‘Alright, All Right’?

It was very much a stream of consciousness song, that just came out one day in one sitting, though years later I went back and added that bridge in, as I realised it needed it.

I wrote it during a time when I was just starting to gig out in NYC and putting everything into making it as a singer-songwriter. I was waiting tables and bartending, living paycheck to paycheck, usually literally counting change out to get by on those last couple days before the next check came.

Restaurants and bars in the city had just started to switch over to paying tips out in checks, rather than cash at the end of each shift, which really hurt a lot of us in hospitality, who had been living on cash tips that we took home at the end of each shift. I was also in an awful living situation, at my apartment, and to an outside observer, was barely getting by on all fronts.

However, I was so devoted to my music, during this time, and working towards this goal of “making it” as a singer-songwriter, that my soul was literally being nourished by this dream, so I felt totally at peace, full of life, and not stressed at all about my outside circumstances.

I wrote this song to demonstrate the power of the mind to, in the words of John Milton, “Make a heaven of hell, and a hell of heaven”.  This song continues to remind me of that (the power of your mind to dictate your experience of reality, and not the other way around)

A couple of silly questions, what’s the strangest thing you’ve written a song about?

Probably a song I have called “You’re Gonna Die”. There are definitely people who think it’s strange I’ve written a song with the express purpose of forcing the listener to come to terms with their impending demise, however it is with the intention of deepening their appreciation of their mortality, enhance their zest for life, and, paradoxically, hope to lessen their death anxiety. That’s strange to some people.

I’m going to be spending some time in Nashville when I get back from tour, to settle into a routine and focus on finishing writing my next album, which is tentatively titled “Memento Mori”. As soon as that’s written, I’ll then focus in on finding the right producer to knock the songs out, as well as securing funding, because these things are not cheap to make!  My self-imposed timeline is to have it released in the Fall of 2023, so I have to get crackin’!