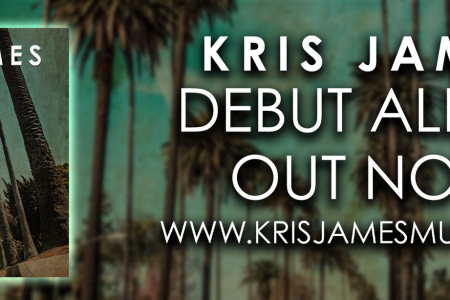 Kris James’ debut solo album has been four years in the making after his band, The Scheme broke up when they were on the brink of making it big time. James, heartbroken by the collapse of the project he’d worked tirelessly on turned to music as he always did as a way of getting through. The result is this 10-track eponymous album.

James was always destined to perform from an early age, “The first time I performed, I was a colour in a play in primary school and we had to sing the rainbow song, everybody was a colour of the rainbow but nobody else would sing their colour so I ended up singing the whole song. It’s never been something that I had to be educated on, it was just something that came naturally to me. I got A* in Drama and Music and everything else I was rubbish at.” James begins. Growing up he was in a number of bands and after leaving school he went to drama school. “Whilst I was in drama school I was given the opportunity to go to London to audition for Universal. They said if I could drop drama school they’d put me in this boy band. The drama school said they’d allow me to leave as long as I came back and finished my degree, which I never did because I’ve never really stopped doing it as a job.”

James’ experience as part of The Scheme has been vital in influencing his direction as a solo artist. “I went into that band, we toured the US, we wrote a record in Germany and we had a couple of line-up changes but we’d been going for seven years, writing some great songs, my confidence on stage had improved and we toured with some great US and English bands. We went all the way to America, got signed by a big label and management deal and then they decided we’d make a record out there. So we went to Minneapolis and we worked with a producer called John Fields, who is basically the guy that made the Jonas Brothers and Miley Cyrus and Demi Lovato – super mega stars. We were out there for three months, and we didn’t know but our pianist had met a girl out there. We recorded half the record and we were going to go back in the new year to finish it with this GRAMMY award winning producer. But Kyle said, ‘you won’t see me again’, he wanted to settle down and have a family with this girl so we ended up getting dropped from the label.”

James channeled his sadness over the breakup of his band into his music and reached out to the label to release some of the songs he’d been working on with Fields under his own name. The song ‘Eyes Open’ featured on this record is one of those songs. “It’s about when everyone says this person is no good for you but you keep trying to make it work and eventually you see that maybe they weren’t great for you after all.” The song was a success on the charts for James, “I didn’t know what to expect and then all of a sudden I was getting messages from the official Top 40 charts!” After the release of ‘Eyes Open’ he reflected on what had happened with the scheme, “Without that happening, I wouldn’t be where I am today,” James says positively.

When it comes to the songs on this album, he focused on making the stories he told relatable. “I’m writing songs as an outlet for me but I’m mindful of other people too because I know the strength of music as a way of helping other people. There’s a song I wrote called ‘Unhappy Anniversary’, nobody ever talks about Unhappy Anniversaries like when you’ve lost somebody, whether you’ve lost a family member or you’re not with that person you thought you would always be in a relationship with, like your first love. So for me it’s personal because it’s somebody that I’m not with anymore who I really miss. But to you it could be about the death of one of your family members or friends. I want to write so people can take something from it, especially at this time, we can help everybody through music.”

After four years of hard work, Kris James is ecstatic to be releasing this record, celebrating with an album launch show this month in his home city of Liverpool and a vinyl launch early next year. His positive attitude and zest for life has paid off and he now plans for the year ahead, teasing some big tour plans. “I can’t really say any names yet, but we’re going to be touring with some really cool people!”