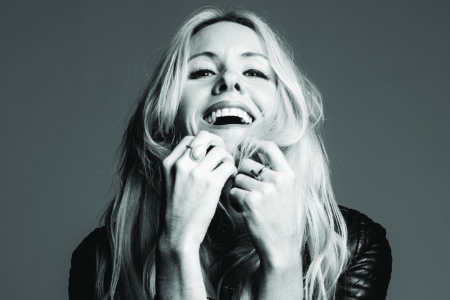 I’ve been singing since I was really small. So I first started singing when I was about five, then I started writing songs when I was about 14. I wrote a song at school and I remember taking it to my music teacher and he started playing it. I was amazed I’d just wrote a song and I think it was that moment that I knew.

When you were growing up, what music did your family play to you on long car journey’s and what are you choosing to listen to now?

Can you tell me a little bit about the country music scene in Wales?

Well, to be honest, I didn’t live in Wales for very long, I went to London because I went to drama school when I was about 14. I remember thinking at the time, there’s not much going on and if I want to make something of myself or be noticed, I always thought, I’m not going to get noticed here. I’m from the valleys of Wales so it’s like, everyone knows everyone in this little village, which is lovely but I realised very quickly that I had to get out to make something of myself. Saying that, Wales is very musical, and there’s a lot of people there that can sing, there’s a lot of bands that come out of Wales, so I feel like it definitely lends itself to songwriting.

Your new album ‘State of Mind’ came out on July 1st, can you tell me about the making of that album please?

I met my producer down here in Plymouth, which is where I live now. His name is Josiah J. Manning, he’s actually part of the Kris Barras band. We made my EP back in 2020 together. I wrote a ton of songs in lockdown, and by the time we got to about summer last year, I had 11 songs that I had picked. We went in the studio, over the course of a few months, and we would do three at a time. I also made like a Spotify playlist of everything I wanted my album to sound like, which is a mixture of everything. He’s a bit of a genius, he plays everything so we just built the tracks together.

Can you tell me the story behind ‘Fire With Fire’ please?

I wrote that song in lockdown, my boyfriend was playing guitar and I just started singing these lyrics. I’m a real stickler for songs that tell a story because I’ve traveled to Nashville, and I’ve got in writing rooms and I feel like the song has to tell a story. But actually, that is probably the most obscure song on the album in terms of lyrics. There was so much going on in the world, I felt like there was a lot of anger and those lyrics just flew out. I guess it doesn’t help anyone to fight fire with fire.

I was supporting Robert Jon and the Wreck and it was a pretty proud moment when they sold out the garage in London and being a support act, you never quite know if people are going to show up to your set. It was a sold out massive crowd at the garage, and I walked on stage and you could hear a pin drop – the crowd just got on board. So that was a big, big moment for me and then I also performed at the bluebird cafe in Nashville. I played a song, one of my own songs a couple of years ago. That was a Bucket List moment. So, two very different moments, but equally great.

I went all the way to Nashville once, and I sat with two songwriters, who wrote a song called ‘Mississippi Turnpike’, which is one of my favourite songs by Shelley Fairchild. I said I want to write my own version of that song. And they said, where are you from? And I was like, oh, this place in Wales. They said what’s the specific name of the town? I said it was Aberdare, then we started looking at the Wikipedia page for Aberdare, and there’s two American guys trying to speak Welsh. I thought there’s no way we’re gonna get that word in a song. I taught them all these Welsh words, it was hilarious listening to these two Nashvillians trying to say Welsh words. Anyway, we ended up writing a song about it, I got Aberdare in a song. So I guess writing a Welsh song in Nashville was pretty weird.

In October, there’s going to be a headline tour. And then yeah, just more live shows. I haven’t really had much time to tour this album, of course, because it’s not out. So the rest of the year is just going to be live shows and touring and maybe some new music early next year. I’ve already written some more songs.