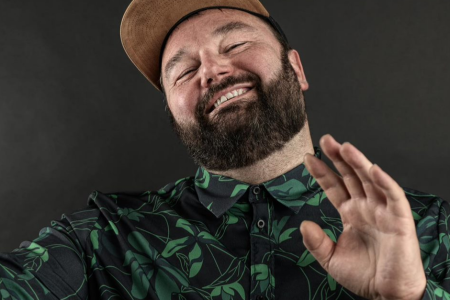 I started playing guitar when I was 6/7 years old, but I truly knew I wanted to be a musician when I was at 6th form. I chose to do standard A levels but really my heart was in pursuing music, so I went to study commercial music at Westminster University. I have always loved writing songs, it’s my gift to the world, that’s how I see it. We all have something to offer this world and music is mine.

What kind of music did your family play to you growing up and what are you choosing to listen to now?

It was all Christian worship music when I was growing up as I was born into a Christian commune; just imagine loads of Coldplay sounding songs with the words Jesus in them ha. Now I listen to all sorts; jazz, Coldplay, a bit of dance music, Sam Fender. I actually love listening to jazz in the bath, it helps me to switch off.

Country music is all about storytelling, can you tell me about your songwriting process and, where you draw inspiration from lyrically?

I draw lyrical inspiration from things that happen in my life and the people that I meet. This has been a new process for me, but I really enjoy conversational lyrics that tell a story and I like to be positive about everything. I think that the human existence is largely built on hope and so I always try and find the positive thing in any subject matter. For example, I wrote a breakup song called ‘Beautiful Soul’ which wishes my ex well rather than bringing up all the negative things. Songs can be healing, especially for me when I write them.

Congratulations on the release of your debut album! Can you give me some insight into the making of that, who did you work with to bring those songs to life?

So, the album was made over a period of about two years. I worked with Louis Souyave, Dave Crawford, Hannah Munro and Lewis Cardinal as writers and producers. Each song was worked on as a separate entity, but I think Louis did a good job of tying everything together mix wise. It was mostly written at home, and then recorded at plastic tree studios and mixed in London at Louis’ home studio. We also had Mando Mike put some mandolins on a couple of tracks, which really adds to it!

I really like ‘Somewhere There’s a Plan’, can you tell me the story behind that track please?

This track was one of the longest to finish to be fair. We started it as a jam at plastic tree studios in summer 2020 during lockdown. The concept is about no matter what life throws at you, just trust in the plan. It’s good to remember that. I had a few of my friends add different musical elements to it including Lewis Cardinal on guitar and bass and Christian Pinchbeck on saxophone. The track was co-produced by David Crawford, Guiseppe D and Jurgen Korduletsch.

A few silly questions for you now, what’s the strangest thing you’ve ever written a song about?

Hmmm… I’ve written a silly jingle about a banana skin before haha. I often write silly jingles. I do this thing at parties where I get people to pick 5 words and then I’ll write a song using those words. The actual songs I release are not really about anything strange, but maybe I will think of something a bit strange to write a song about.

If you were to describe your personality as a flavour of crisp, what flavour would you be?

I’m about to embark on a garden tour, playing fans back gardens and then I am doing a school’s tour as well in July along with various festivals over the summer as well. Also, my new album ‘Believe IT.’