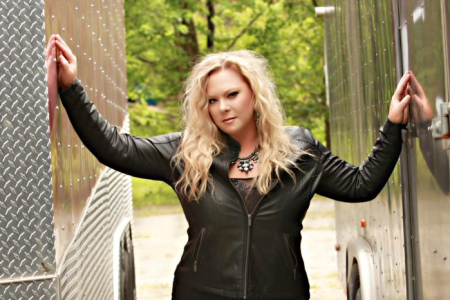 I wanted to become musician when I was in elementary school…that was my dream as I sat in front of the tv on Saturday mornings watching “Kids Incorporated,” singing and dancing with those kids.  I thought maybe I would have a shot at being a full-time musician when I was 19 years old when I cut my first album in Nashville, but the producer and people I was surrounded by did not pull through on their promises, so I got really jaded quickly.  I quit music for about 18 years before the urge came to me again.  At that point, I really wanted to be in music full time again, so I just made it happen.

What music did your family play to you growing up and what are you choosing to listen to now?

My mom played a lot of Elvis, Beatles, and some 60’s and 70’s popular music and some country. I listen to everything now so that I know what to play when I have to do cover songs at gigs.

What’s the songwriting process like for you, do you always start with a lyric or melody or is it different every time?

I start with an idea and a title when I write.  I get with my co-writers and we talk about a sound direction and then a melody pattern.  The song kind of develops from there.

Can you tell me the story behind your song ‘One Too Many’?

“One Too Many” was written by me and Sarah Morey back in December 2020.  I had an idea about a person sitting at a bar drowning their sorrows from a breakup from someone they loved very much.  This person just keeps drinking until the memories fade and might eventually pass out.  I always try to write things that are relatable to everyone.  Everyone has been through a heartbreak and knows that feeling of just wanting to forget the hurt they feel.

Can you tell me a little bit about the other people involved in bringing this song to life?

Sarah Morey is a great co-writer.  She is young and full of fresh ideas.  She is a recent graduate of Bellmont University in Tennessee and I believe she has her degree in songwriting.  The Nashville studio musicians on this song were instrumental in creating the sound you hear, and I couldn’t be happier with the production of it.

I would have to say that I am extremely proud to share my musical talents entertaining the troops overseas.  I am proud that I keep being asked back time and time again.  My husband served in the Army National Guard and was activated and deployed after 911, and he was stationed in a warzone.  He missed home terribly, so for me to give back to other service members who miss their home and need some of home brought to them, I’m extremely honored and proud to perform and give them a reason to relax and cut loose while I’m there.

I plan to keep writing and releasing music regularly.  I have some more overseas military tours with Armed Forces Entertainment and ProTour Productions coming up. I leave for Japan, Guam and Hawaii in October to perform for the military; and then in December I am in Greenland, Curacao and Guantanamo Bay. My plan is to just keep moving forward!