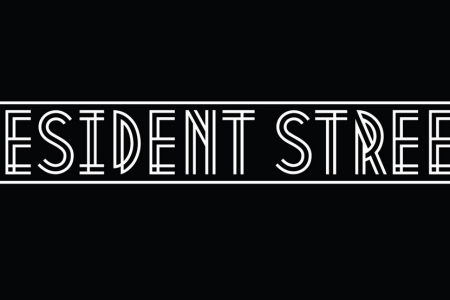 The Australian duo President Street have been enjoying touring around the UK and Europe in recent weeks. Their sound has shifted a lot with the release of their new record ‘Heartbreak Player’ from their acoustic beginnings we now hear a heavily produced, electronic-pop sound. Ruby and Pete spoke to me about the new release and this change in direction. “Our first EP had more rock and country elements to it,” Ruby begins. “We’ve been songwriting together a lot more since then and it’s just gradually moved to a more pop direction.” Pete continues, “We might have had a few different voices in our ears for the first EP and then over time, as we put out those voices around us and just listened to the two of us, we naturally ended up drifting into the space that we are now.”

The pair write all their songs 50/50 and though each track on this latest EP has a catchy hook and beautiful melodies, the pair don’t have a set process for how they write. “We don’t have one specific formula,” Pete says, “Some will start with a fun lick on guitar or it might start with a lyric or Ruby might have a melody in her head that she sings out. One of the things that we’re very focused on is we’re not writing with an outcome in mind, we’re just letting the songs write themselves in a way. We focus on finding the emotion we’re trying to capture and on the storytelling side of it. Overall, the energetic journey of the song is really important as well. We want people to feel strong and uplifted after listening to our music.”

The title track and single ‘Heartbreak Player’ is an up-beat track littered with hooks, “It was a fun one to write,” Ruby says with a smile. “Lyrically it’s a little bit cheeky. It’s about the juxtaposition between reality and fantasy in love and giving yourself that bit of a pep talk to hopefully make some better choices than what you may have been making in the past.” When it came to bringing the song to life in the studio the pair were excited by the possibilities. “We felt we had something special when Ruby came up with the pre-chorus in the studio, the lyric, the melody – we just knew we had something with that vocal line.”

For this latest tour they have utilised technology in their live performance to create a really special show. “We decided to use a loop pedal. Obviously coming over to Europe is a big exercise, last time, we played acoustically but we were playing much bigger venues this time so we wanted a bigger sound that fitted the venues. We wanted to push ourselves so we’ve completely recreated our live set-up. It’s more dynamic and energetic and a lot of fun for us to play.”

Even as they continue this European tour, Ruby and Pete are already looking ahead to next years touring plans, “We’re back on tour in the UK next April and May,” Pete says. “That’s going to be across all of the UK, it’s quite a big tour so we’re looking at trying to release an album to coincide with that” he teases.