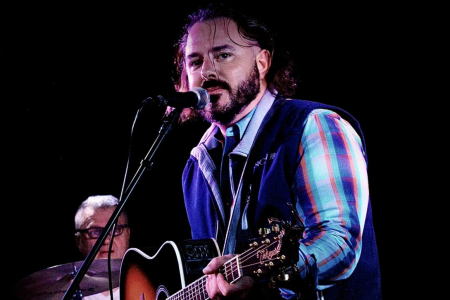 I knew I first wanted to be a musician around the age of eight. The radio was filled with the new sounds of 90’s country hitmakers Garth Brooks, Brooks and Dunn, Clay Walker, Doug Supernaw, Billy Ray Cyrus and many others. I knew one day I would want to be a part in making that type of music. I would constantly sing into the mirror, sing on the playground, or in the car.

When it comes to your songwriting where do you draw inspiration from?

Music is god’s language to the heart. I take the emotions I’m feeling or the things I’m dealing with in my life, and I write a song about it. I think that’s what helps people connect to music. When a singer is writing music from the heart, other people hear it and feel the same emotions. Some of my favorite songs in my life really captured something I was feeling at the time. The singer spoke to me through their music, and that’s what I’m doing when I sit down to write my own music.

Can you tell me the story behind your song, ‘The Life I’ve Lived’?

The Life I’ve Lived is a story about my life. My mother become pregnant with me at the young age of thirteen. She was pressured to abort me, but she chose to lean on her own faith and keep me. That’s where the opening line “They all tried to kill me, before I was even born” derived from. Since that decision, she granted me the opportunity at life. A life that wasn’t easy at times but has also had some very high points as well. It’s a story of the life that almost never was. It’s a story about fighting for another day, even in your darkest time. It’s about the beauty in life even when things seem dark or difficult.

The European country scene has embraced you since moving there, can you tell me a little bit about that please?

Europe has been one of the greatest experiences of my life. I never imagined that people so far away would embrace me and my music the way Europe has. I will forever have a strong presence in Europe and a gratitude and appreciation of the European people.

I wasn’t sure what to expect being a country singer from Texas coming to Europe, but so far the crowds have really welcomed me and enjoyed my music. A lot of people in the US can’t imagine there being country music fans in Europe, but everywhere I’ve been I’ve seen people really embracing the music and enjoying my shows.

You’ve played a number of benefit concerts for Ukrainian refugees, how important is that cause to you?

It’s a very important cause. An invasion of a sovereign nation is something the world shouldn’t stand for, especially in present times. I’ve met so many Ukrainian people, and they are a strong, vibrant, resilient people. If I can ever offer the slightest bit of help, even just the smile of hearing a song they like, I’ll give it my best effort.

I feel like my music has offered them a little bit of comfort during the most difficult time of their lives. I can’t imagine what they’ve been through. I’m just happy I can bring a little joy to their lives right now.