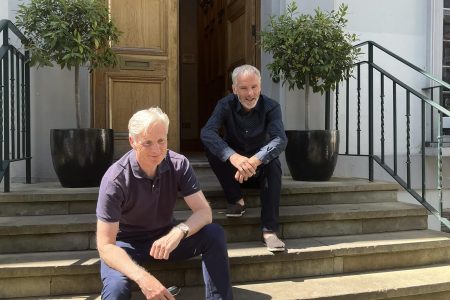 Tony and Kevin had a busy 2022 as they released some fantastic new tracks and gained a larger following through their presence and performances at a number of major festivals. The friends who grew up together loving music but who parted ways to pursue successful careers away from the limelight have reunited to become one of the leading forces of the UK country scene.

The duo began the year with a fabulous set at Country 2 Country – Europe’s biggest country festival before playing Black Deer and The British Country Music Festival. “It’s great to have been able to thread those festivals throughout the year especially such high caliber ones as well,” Tony begins, a smile appearing on his face as he reflects on the year they’ve had together as a duo. “We’ve loved getting to know the audience as well as them getting to know us.”

The pair have exploded onto the country scene over the last couple of years but their friendship goes back years. Tony tells the story of how they first met. “We met at school age 11. We traveled on the same bus for part of our journeys home and it came up in conversation that we were both musicians. At the age of 14 we were playing in Kev’s dad’s Irish Country band. We as youngsters had the opportunity to play live so that’s where it began.” When they were 17 or 18, before they left for Uni, the pair were driving themselves to gigs, playing two or three nights a week. They played over two hundred shows together. “We were listening to Gram Parsons and Emmylou Harris during that time,” Kevin says, “and that wasn’t the norm for a couple of 16 or 17 year old school boys in Nottingham. That love stayed with us all these years so it’s no surprise that’s what we’ve come back to.”

The UK country scene is still very much a growing market and Kevin and Tony are delighted that The County Affair are a part of that growth. “I think one of the things that excites us about what we’re doing is the rapid growth of country and Americana as a genre in the UK. There’s been a growing number of good high caliber, British artists coming through.” One of their songs off their debut album ‘Every Ghost’ captured the hearts of fans in the UK as it showcased their compelling storytelling lyrics. Kevin, the main writer of the pair divulged the story behind the thought-provoking track that put the duo on the map.

“The general idea of my songwriting is to be a storyteller, which is a great American tradition. That can be drawn upon snippets of things I’ve seen in life. The inspiration for that song was really passing somebody sleeping on the street near to where I lived, and my wife stopping and we gave the person some money and was chatting to him. Afterwards she said she had met him before and just basically explained that you know, two or three years earlier, he had a house and a family. He lost his job, found out a few mental health issues and the next thing, he is a guy sleeping on the street and people are just ignoring him. Nobody chooses to sleep on the street and have people just wander past them all day. That was the inspiration of the song. You might realise it could happen to any of us in reality, it’s not a life choice for sure.”

The duo began their recording career at one of the most famous studios in the world – Abbey Road. “Imagine how we felt the first time we had that invitation!” Tony begins. “It came from a producer who randomly discovered our music and contacted Kevin and said, I like what you’re doing, I think I can take you to that level beyond what you’re doing by yourselves. Do you fancy coming and working with me out of Abbey Road Studios? You can imagine how many milliseconds it took for us to say yes to that. That was a terrific experience, it’s a very special place with its history and meaning to the UK music world – global legends of music, have recorded there. You can sort of sense it in the walls of the place, I suppose.”

Though it started off as a happy coincidence that they began recording at Abbey Road, they have returned time and time again and one of the reasons for that is due to the general consensus that the British country scene doesn’t thrive as much as it should not because of the quality of the songs but because of the quality of the production. “Speaking to people in the industry, from an AirPlay point of view, there is a challenge about production quality of some of the music out of the UK versus our US competitors. So one of the things we’re making sure is to have a high caliber of production, not just good songs, but they’re really well produced so they’ve got the best chance of radio play.”

If 2022 was a good year for The County Affair, 2023 is looking even better. The release of their latest single, ‘Weekend Cowboy’ is sure to whet fans appetite for their upcoming second album due out in March. “We’re very fortunate to have been signed to a small record label called Lassman records,” Kevin says as he begins to introduce us to the music they’ve been working on. “They’ve worked with us on making album number two which is now complete. It’s been great fun and we’re really proud of it. Our single ‘Weekend Cowboy’ comes out on the sixth of January and the album which is called ‘Two Days Drive’ will be out in March. We were shooting a video for ‘Weekend Cowboy’ and we put a note out to see if anybody wanted to come along.”

Tony adds further to the inspiration behind the song, which the pair enjoyed getting the fans involved in. “It takes influence from our experience of the festivals over the last 12 months, 2022 has been a year of festivals. This time last year, we were touring in support of Ward Thomas. So we’ve had a lot of opportunity to look in the eyes of the audience who are following the country music genre in the UK. It is an observation about how people are into the music, but they’re also into the lifestyle, the fashion, the opportunity to dress up and enjoy themselves, go large a little bit at the weekend.”

The pair, with their songwriting talent, quality production and good business sense will surely be the talk of the town this year when their new album drops and I’m excited to see The County Affair go from strength to strength over 2023.