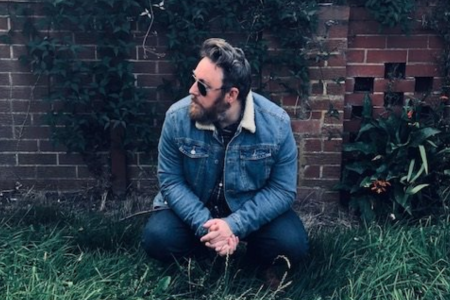 When I was around 11 or 12 I started getting into music in a big way, before that it was whatever my mum was playing in the house, usually Motown or Northern Soul. When I first received a tape of Pearl Jam and Nirvana in 1992 from a friend in school, it lit a bonfire in me that has never left. I then started to join the dots back to music before Grunge and started tracking down old vinyl’s of Queen,/AC/DC and Aerosmith in local second hand shops and music shops and I’d listen to them time and time again, pouring over every liner note and taking in every note of music. A few years later Britpop hit in the UK I was utterly in love with it, it was everywhere at the time and all these incredible bands and all this new music inspired me to pick up the guitar and start writing my own music and I’ve never looked back.

Tell me about the formation of The Far North?

I was in a lightly successful band called The Fireflys from 2007-2019 and we played what some might call Americana music on our latter 2 albums and I really wanted to lean into the genre more because as a songwriter it’s probably my most comfortable wheelhouse to write in. However, the Fireflys were first and foremost a rock band and it wasn’t really fair on the other members to keep scratching this itch I had musically to play a more Country style of music that my head and heart belonged to. Ultimately, I had to go my own way and branch off on my own because I had 30 or more songs in my back pocket that I was dying to record and perform under a new name. I had the name “The Far North” as far back as 2015, I was thinking about the solace and safety of what music brings me and imagined a place where all I’d have was my acoustic guitar, and that place was the far north. So I made a note in one of my journals and it said “a good band name if I ever branch out on my own”. I was thumbing through my journal for inspiration a few days after The Fireflys called it a day and there it was – “The Far North”.

When it comes to songwriting, where do you draw inspiration from lyrically?

When I sit down to write it’s always the strangest thing because it either happens or it doesn’t, and by that, I mean it’s genuinely the luck of the draw in terms of a song arriving almost fully formed. I’ll sit there with my guitar and I’ll play G-D-C which I’ve played a million times before but for some reason I’ve never played it like this – the feeling, the vibe is there and I know I’ve got something. Lyrically I’ve never written lyrics down beforehand and tried to marry them up to music, instead I’ll press record on my phone, if I’ve got the chords and whatever comes out tends to be the finished lyrics there or thereabouts. A lot of my lyrics are about love and loss, hope and fear so I guess like everyone else these feelings must be pretty near the top as they keep coming out in my writing.

My favourite song off your album is ‘When We Were Young’, can you tell me a bit about the story behind that track?

‘When We Were Young’ was one of the first songs I wrote that was comfortably in the Americana/Country genre, and along with ‘Branches’ was the song that made me actually realise that I was a good songwriter with something to sing about. I was thinking about my old neighbourhood a lot during this time and how strange it is that one minute we’re 10 years old playing out with our friends, the next we’re in our mid-thirties with all the stresses that adulthood brings and wishing it was the good old days again. I wanted it to sound a little melancholy but also uplifting, like that sense of nostalgia we all feel that is sometimes sad and sometimes happy, and I think I blended it nicely on this one and I got to do a little play on words with my love of Neil Young too on the title!

A few silly questions, what’s the strangest thing you’ve ever written a song about?

I’ve written a song called “Angels Of The North” that will end up on my second album eventually. It’s about the UK’s asylums in the 1930’s and what went on in there, and it’s from the perspective of someone who’s in there and dreams of the day they can get out. It’s a little eerie and strange but definitely a subject not too many songwriters have written about so I thought I’d shine a little spotlight on it. It’s quite a departure from my usual songwriting, so I’m intrigued to hear what people might think of it.

If you were to describe your personality as a flavour of crisp, what flavour would you be?

Well I’m Vegan so it’d have to be something that didn’t contain any animal cruelty, and I’m obsessed with the sea and all things nautical so I think sea-salt is a pretty good call. Although, my love for a cup of tea is also well known amongst my family so maybe Earl Grey flavoured crips – has anyone invented them yet??

I’ve written the bulk of album 2 already and I’m in talks with the label about putting out an E.P in the Autumn so along with the shows I’ve got coming up I’ll be really focused on that.

The E.P will definitely have a huge Country and Americana sound but I think it’ll be a bit louder than “Songs For Gentle Souls” with a bit more overdrive and believe me, some more pedal steel guitar to the fore!