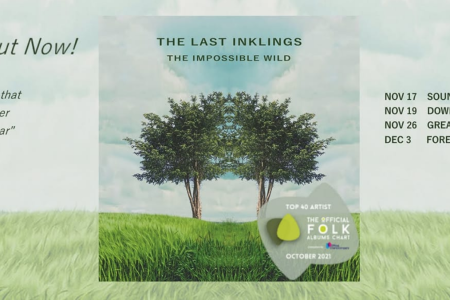 The Last Inklings have just released their debut album ‘The Impossible Wild’. Themes of folklore, myths and legends  dominate the record whilst sonically the Cello and Mandolin take centre stage.

Though it may be the pair’s first release they have been playing together for a while now. “We started off with like a covers band with lots of different members,” Leonardo begins. “One day just a few of us showed up for practice and we were trying to decide what to play. We had a shared interest in storytelling and folklore, certain books which we’d all read like Neil Gaiman, Terry Pratchett, Tolkien, that informed our own songwriting and then we kind of grew from there as a duo.” Musically the pair have eclectic tastes but meet somewhere in the middle, sharing a love of singer-songwriters and composers. “I first got into music through people like Damien Rice. He had a cellist and a good friend of mine was a guitarist, so we could do covers of his songs. I’ve got a classical background too, we kind of meet in the middle with composers like Max Richter,” Leonardo says.

When it came to writing for this record the pair began searching for stories, “We start off with a story and make the song serve that story instead of coming up with a riff and trying to make things fit that music” David says. “Sometimes we come up with short stories or poetry and we try and match it with a piece of music that we’ve written, that complements the theme of that story.”

One such song that began as a piece of poetry was ‘Sleeping Giants’, “They were sort of based on the theme of using an extended metaphor to describe an emotion and that particular emotion was one of grief. The metaphors were forest creatures. A newborn mouse has very distinct connotations of being fragile. It brought these feelings forward that I wouldn’t be comfortable talking about in real terms. Then we matched that with a mandolin riff we had that was delicate, a little bit whimsical before adding the moving cello parts underneath.” David explains. “ It does fit the the undercurrent for the album, which is kind of one of environmentalism or conservation.”

A stand out track on the album comes from ‘The Unkindness of Ravens’ which perhaps shines a spotlight on their clever lyricism. Leonardo’s face lights up as he begins to tell the story behind that track. “There’s a hill fort near where we live called Badbury Rings, there’s a national trust property nearby and what connects the two is an avenue of beech trees,” he enthuses. “There’s lots of local legends as to why there are a certain number of trees, what might happen if you count them correctly on a certain night of the year and the song is the tale of what might happen if you stumble upon the right night of the year and you managed to count the trees. Live we’ve got two versions of it one where the ending is very happy or the second one they get cursed and they get turned into a raven. A group of ravens is called an unkindness.” David adds with a grin, “We like to stoke the fires of these local legends to keep them alive.”

Their songs are well thought out sonically, with the textures of each track unique. Leonardo – who has crafted some of those interesting, moving Cello parts, explains his influence on that, “I spent a lot of time in lockdown burying myself in new kinds of music theory, getting some jazz under my belt. Quite a lot of the melodies are born out of the chord sequences. If David’s written a chord progression, quite often I’m feeling my way through those chords. As you start to connect those notes up, the melodies sort of come from that. Then they’re mimicking bits of maybe the vocal melodies as well. They’re almost in a gypsy jazz way embedded in to what we’re playing.” David adds, “Almost exclusively, the songs are written with mandolin and cello, and then layered up from there.”

Since their first EP came out just before lockdown, The Last Inklings now have a lot of music to get out and tour with and with the world opening up they’re getting the chance to take this unique record out on the road!