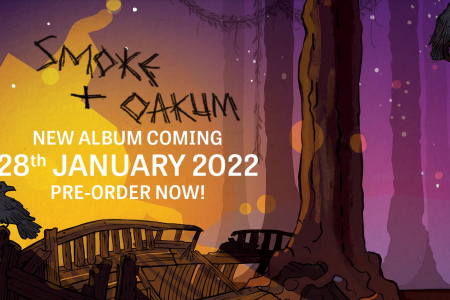 I wondered if you could tell me when you guys first met?

Dave: We started singing together nine and a half years ago now. We were all friends before we started as a band, we’ve known each other around fifteen years.

Do you remember the first time you all sang together and did you know how special it was?

JD: It was a strange set of circumstances. We were just chatting about what music we’d been listening to and we’d all just happened to have listened to sea shanties at the same time. So we thought we’d give it a go, we knew all the words and thought it’d be easy to pick up so we sung one at a party we were at. It sounded alright so we sorted out, I’ll do the low bit, you can do the high bit and it’s kind of gone from there. We sang it at an open mic night that night, and that was the start of everything. We recorded some videos in one of our ex members kitchens at the time, stuck one on YouTube a week later and that was the start of the band. We just love the sound and the feel of the music so decided to crack on and keep finding more and learning more and having a great time with it.

You have a nice mix of traditional and originals, what’s the writing process like for you?

Dave: Sometimes it comes from something from history that I can discover or get interested in. I listen to a couple of podcasts that kind of talk about interesting things from history that people might not know – there’s a lot of inspiration there. Sometimes it’s trying to relate personal experience into the genre. Obviously, using a lot of metaphors, because none of us are actual sailors or anything like that.

Tell me about the attention you received on TikTok, did that take you by surprise?

JD: It had been taking us by surprise for about a year and a half by the time that happened, weirdly enough, because we released the song ‘Wellerman’ back in 2018. It was just like any other song we’d done at that point. We did a video on YouTube which is one of the first videos we did. We used ‘Wellerman’ in the first video we did, we were playing the game Sea of Thieves. We played the game being pirates, but instead of fighting people, we went in and sung at people instead and made friends. That video did really, really well and every couple of months, it seemed like it would suddenly go viral again on a new platform. So it had a moment in the sun on Reddit and Tumblr. It started to gain its own life and traction from then. Every now and then our listeners on Spotify would have suddenly doubled. So we’ve been in this constant state of oh, this is amazing, I can’t believe this has happened. When January happened, we’re like, oh, this happened again. Then suddenly, the phone started ringing all the time. It was all these major record labels and agencies and media outlets, trying to find out what was going on. We realised something different happened here.

What made you decide on the single ‘Hard Times Come Again No More’?

Andy: It’s a popular American traditional song, we really liked the lyrics and melody and I think it’s quite apt for today as it’s all about overcoming problems and looking for the joy in things.

What’s the strangest thing you guys have ever written a song about?

Robbie: Well Dave’s got a pretty strange one about a giant duck.

Dave: Yes that was definitely a title first and song after kind of write, it’s called ‘Moby Duck’.

When you’re on stage and you’re all performing are you completely focused or do you let your mind wander?

Robbie: The mind wanders terribly. It’s almost not a Longest John’s gig if it doesn’t. We’ve got very good at digging ourselves out of holes like forgetting lyrics. We like to take it professionally now but there was a fair few years where a decent amount of alcohol would be imbibed before a show and some shows would be great, sometimes they wouldn’t be so great.

JD: If you don’t let your mind wander it’s harder to remember the words, you overthink it and think what have I been singing all these years. You’ve just got to relax and enjoy it, it’s more fun that way.

If you were to describe your personalities as a flavour of crisp what flavour would you all be?

Robbie: JD is cheese and onion because he’s a vegetarian but you’re also a solid British staple and a bit cheesy.

Robbie: No he’s a weird one like sage and turkey that only comes round at Christmas.

Finally, you’ve got the album coming out but what’s next for you guys?

JD: There’s a lot of interesting singles coming out from the album but a lot of the things we have planned are built around the pre-order campaign for the album. It’s custom built from the ground up with loads of interesting things, so the more people take part in different activities on the website  the more things can happen and unlock, which is very exciting.