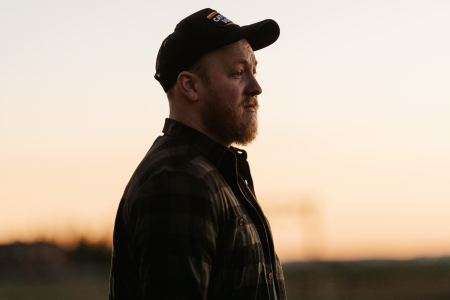 I wondered if you could tell me when you first knew that you wanted to be a musician.

I first knew I wanted to be a musician when I was in high school. I didn’t really grow up playing music at all but then, my dad got me a guitar and I learned some Zeppelin songs. Then I started going to a church when I was in high school, because there were girls there, it wasn’t for Jesus, I don’t think! They had a bunch of people from their band leaving and they were like, you’re very extroverted, we think you’d be good up on stage. Next I was the new band leader, here’s some CDs, learn it. Once I started getting into the music in that way, I really enjoyed it and loved it. I was probably in my 20s when I decided I wanted to really pursue it.

What sort of music did your family make you listen to on long car journeys, and what are you choosing to listen to now?

Can you tell me about your experiences with the Canadian country scene?

I started releasing music, and it was just before the pandemic hit, so I didn’t really get to experience a lot of the industry yet. I’ve been to the Canadian Country Music Awards, and I got to play this last year on the awards, but I didn’t really have much experience of the whole industry. Country music is massive over here but the family is small. We’re a pretty tight knit community and everyone’s been so supportive – we want to see each other succeed. Nashville is very similar, people are super supportive there as well, it’s just the pool’s way bigger. I think there’s like 30,000 songwriters or something like that down in Nashville.

So when it comes to your own songwriting, where do you draw inspiration from? And is the process for you always the same? Do you have a sort of a secret to how you go about writing?

If I have a secret, I don’t even know it yet! I think a lot of my content is pulled from my breakups. It’s about pulling things out of life experiences, there’s a lot of songs that aren’t really about much and I think country music is supposed to be about telling stories. I have a song called ‘Sometimes I Do’ and when we released it to radio, we’re having interviews and everyone asked what’s the song about, I was like, nothing. And that’s okay. It came out right after a song of mine called ‘Fighting’ that was super deep and about mental health. You can have the songs that mean a whole lot and the songs that don’t really mean much, but you still got to tell a story with it.

I wonder if you could tell me a little bit about the story behind ‘Pillow Talkin’ because that was your debut and you made a little bit of history with that track, didn’t you?

That song changed my life. I was in Nashville, just writing every single day. We were actually writing a song called ‘I Would Be Over Me To’. Myself, Mitch Merrett and Kelly Archer. I know that she’s just this phenomenal writer. At the end of that write, she pitched me ‘Pillow Talkin’. She’s like, I got this other song that I think you should listen to. She plays it and I’m just like, damn, that’s a great tune. I just knew the song was a hit no matter who’s gonna sing it. That one was going to be my foot in the door song. Then we kicked the whole damn thing down. I remember hearing that song for the first time on radio, when I was on a construction site, working, and we just had the radio going on. They’re like, alright, we got this new artist from Surrey, BC, Tyler Joe Miller with his debut single ‘Pillow Talkin’, I’m like, What the hell? So that song was the start of everything. It was the first song by an independent label, to go to number one in Canada. So that was pretty damn cool.

Tell me about your latest single ‘Wild As Her’?

Kelly had sent the song over, because she’s a writer on it as well. I’m listening to the demo, and I’m like, sounds pretty cool, I like this. I wasn’t thinking about who’s singing this song. My manager calls me and he goes, what do you think about that Morgan Wallen song? I was like, What do you mean? He says, the ‘Wild As Her’ song that we sent over. That’s Morgan Wallen singing it, he’s a writer on the song. I was just like, I don’t know if I can do that song justice! I haven’t done a love song, I’m like, notorious for not really doing them. But this song is sort of halfway there.

Can you tell me about the charity work you’ve been doing?

I’ve got a nonprofit called The Climb outreach society. I actually was working for a church at the time, they were doing this trip down to Guatemala. I just had some vacation time I had to use and I’d never left North America before. I just fell in love with the place and the work that they were doing down there is unreal they will build homes, schools, get clean water into villages that don’t have it. We do baby rescues for kids that are malnourished, like out in the mountains that don’t have access to medical care. I’m a carpenter by trade, that’s my jam. We were doing it for two years, and then all of a sudden, the church that had started going down there and partnering with this organization in Guatemala, they just stopped. But I was like, we sponsor two villages here, we can’t just give up on them. So I decided I had to take over, I have to start a nonprofit.

We have lots of new music, I just don’t know how we’re releasing it yet. I think we’re going to do another EP this next year. We just have a ton of music that we don’t even know what to do with, which is a good problem. We’ve got a huge summer just filled up with festivals, a ton of shows all across Canada, we’re going coast to coast, which is really cool. I’m playing a set at the Blue Jays game, in the Baseball league which I think will be televised as well which will be cool.