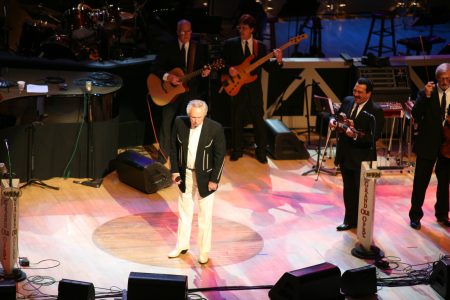 Singer of “I Ain’t Never” and “Coca Cola Cowboy”, Mel Tillis, has died aged 85 after a six-decade career.

The country music singer died on Sunday, his publicist confirmed, at Munroe Regional Medical Center in Ocala, Fla., The music legend is believed to have died from respiratory failure after he never recovered from intestinal issues he has been battling since 2016. He leaves behind his longtime partner, Kathy DeMonaco, his six children and six grandchildren.

Tillis recorded more than 60 albums and had 35 top ten singles in his decades-long career. His 1979 “Coca-Cola Cowboy” was one of his biggest hits, along with “Southern Rains” in 1980 and “I Believe in You” in 1978.
Tillis also appeared in television shows such as “Hee Haw” and “Hollywood Squares,” as well as movies, including “Smokey and the Bandit 2.” He also did commercial work for Wataburger, according to the Tennessean.

“He did his best to try and keep my head on straight. I looked up to Mel more than he could’ve possibly known. A talented songwriter. An incredible entertainer. And a funny funny guy. It has been a couple years since I saw him last. I deeply regret that now,” he added.
Shelton concluded: “What a truly devastating loss. I loved Mel. I will miss him terribly. My thoughts and prayers to all his family.”
Other country music stars also shared their condolences with Crystal Gayle tweeting: “I’m saddened to hear of the passing of my friend, Mel Tillis. Sending my love and prayers to his family and friends. There will never be another Mel Tillis! #MelTillis #HeavenEveryday @PamTillis.”
“What an incredible loss for the country music world. Mel Tillis will be greatly missed,” Rascal Flatts said.