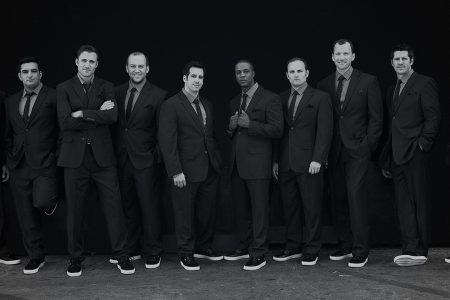 Having only heard of this group just two weeks before the show after seeing a tour advert in a national newspaper, then checking them out on YouTube, reviewing their latest CD WITH A TWIST, to taking a drive out to Hertfordshire with my wife to catch them in concert … that is how good they are and how much of an impact their music had on me. As always I ended up chatting to people at the concert and quite a few had seen them as a support to Barry Manilow, prompting them to book to see SNC on their first UK headline tour, as once again, they were that good! Entering the stage to massive applause this American a cappella group went straight into the Temptations’ soul classic “Get Ready,” driving the audience to tapping their feet and moving in their seats right from the off. The medley of “I’m Yours/Somewhere Over The Rainbow” quickly followed, sending a nice warmth through the hearts and souls of everyone present. Normally a ten-piece group but on this UK tour they were without Don Nottingham, but the nine consisting of Charlie Mechling, Seggie Isho, David Roberts, Tyler Trepp, Jerome Collins, Ryan Ahlwardt, Randy Stine, Walter Chase and Michael Luginbill put on an amazing and in fact quite awesome performance. Tenor 2 Jerome took lead vocals on Marvin Gaye’s “Let’s Get It On” that had everyone awestruck at the superb harmonies. It was then the turn of tenor 1 Ryan to take the singing range up even higher on the fun tune “The Lion Sleeps Tonight.” The singing baton was then passed to the bass singers, with Randy opening the beat to Carole King’s “Hi De Ho” leading into the lead vocals from fellow bass singer Charlie, alongside two tenors, Walter and Tyler, the harmonies were again out of this world and the song ended with Charlie singing as low as he could go…Amazing! Normally with medleys you have two or more songs put together, with one sliding into the next, but with these guys the medley songs are fused together so that at times you have two songs being sung at the same time but to the same tune, absolutely brilliant. They did an entertaining medley of Beatles and Rolling Stones, mixed the Bee Gees “Staying Alive” with Stevie Wonder’s “Superstition” which also had a fabulous dance routine, as did the Michael Jackson medley of “Billie Jean/Poison” with Jerome doing all the Jacko moves, as well as throwing in full splits to top it off. The harmonies on the Jersey Boys’ medley were top class, with Tyler taking a superb lead. They even took on a mix of Cee Lo Green’s “Forget You” and Lady Gaga’s “Bad Romance,” dance moves and all, to the total delight of the audience. They sang the slower songs beautifully, with Michael taking on Madonna’s “Like A Prayer” and winning. A gorgeous version of “Bridge Over Troubled Water,” Coldplay’s “Fix You” was just a charm and Jerome proved to me how good a song “Wonderwall” actually is. With “Tainted Love” being a real pleaser for all the fans as it had all nine standing in a row along the front of the stage as they nailed the song brilliantly. They brought the night to a close, encoring with the song that made all this possible. Back in 2006 Randy Stine posted clips from a 1998 concert on YouTube and this particular one was viewed more than seven million times in 2007 alone. Although this was February the song in question was a special comic version of “The 12 Days Of Christmas” incorporating Toto’s “Africa,” as with all the YouTube fans the whole audience at the Arts and Leisure Centre also loved it and were rolling in their seats with laughter, what a perfect way to end such an entertaining and totally enjoyable evening. Who needs musical instruments when you have nine voices as good as these guys? Just by word of mouth they will pick up more and more fans each time they tour, in fact I emailed a friend after this concert and he then went to the London gig the next night and had a great time, so why not check out their website below and see what all the fuss is about.

Find out more at www.sncmusic.com