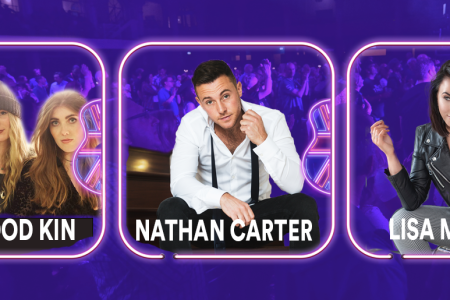 There is a buzz in the air as The British Country Music festival returns to Blackpool for it’s second year! After the past 18 months, the impact it has had on the arts in particular, never has there been more of a need to celebrate and support our homegrown talent and that’s exactly what Marina and Martin Blore intend on doing for years to come at The British Country Music Festival. With headliners Nathan Carter, Wildwood Kin and Lisa McHugh all ready and raring to go, the stage is set for an incredible weekend in the North of England. I was keen to catch up with Marina to delve into the passion behind the festival and talk through the trials and tribulations of putting on an event during Covid times.

The festival has been going for a few years now, where did the original idea come from? What ignited that passion to support British Country artists in particular?

It’s actually only been going for one year. We are a husband and wife partnership and Martin and I launched The British Country Music Festival through our company Fit The Bill Ltd in 2019. Of course, we missed 2020 due to the pandemic, but we are back for our second year in 2021.

The idea for the festival came from a previous event we used to produce in Liverpool from 2016 to 2018 called Folk On The Dock that attracted up to 80,00 people over three days. We discovered so many new artists that crossed over from folk into country, Americana and roots and we could feel the groundswell in popularity of what was a new approach from UK artists to country music.

Gone were the references to American parlance and they were being replaced by beautiful lyrics that were relevant to the British Isles. We were beginning to hear our own brand of country music. That prompted us to provide a platform for homegrown, singer-songwriters to grow their audience, unite them and show the rest of the world the amazing new country sounds that are now easily identifiable as being from the UK.

Back in 2016 we booked Robert Vincent to perform at a fringe venue for the Liverpool festival and two years later he headlined on the main stage. Now he is backed by the wonderful Bob Harris. Wildwood Kin were on our main stage at Royal Albert Dock in 2017 and The Luck and Pete Riley performed in 2018. All these artists are making huge waves now and time has proved that UK country music is fresh and it is making Nashville and the rest of the world sit up and take notice.

When we launched The British Country Music Festival, many in the industry thought we were mad. They said we needed international artists, that British country music was not enough to stand alone and attract a festival audience. But we are delighted that we stuck to our principles and that the numbers attending the festival this year have grown by 50% with many retaining tickets for year two that they bought at the venue in 2019! Whilst our audience appreciate the headliners, above all, they are music lovers and they are very keen to discover and support new artists and that is what TBCMF delivers.

How has Covid affected your plans for the festival over the last couple of years and how have you adapted to those obstacles?

We were one of the first to cancel 2020’s event back in March last year and I think that was the right move, as the early notice and clarity of message was appreciated by our ticket holders. Whilst it has been an amazingly difficult time for many festival organisers, we have suffered less than most due to our commitment that 98% of our artists are from the UK. With only two international artists this year; Candi Carpenter and Juna N Joey, we have not been reliant on travel restrictions and quarantine issues, as almost our entire programme are all travelling from the UK, including our headliners Nathan Carter, Wildwood Kin and Lisa McHugh.

Understandably, ticket sales over the last 18 months have reflected the mood of the nation in line with the impact of Covid-19. When restrictions were lifted sales increased and when lockdown came again, they paused. However, the mood now appears to be one of cautious optimism. The majority of UK citizens will have been offered both vaccinations by September and it looks like our festival goers are returning to the country music community, where maybe they feel safer than they would with other music genres.

What impact do you think the festival has had on the homegrown talent and the country scene here?

Whilst it’s still early days, I think The British Country Music Festival has proved that we clearly have an abundance of UK country and Americana singer-songwriters capable of taking on the best of the rest of the world. Look at the success of The Shires, Ward Thomas and Yola across the pond, whilst it can only be a matter of time before Twinnie takes on Shania Twain in America.

We are also providing the opportunity for homegrown artists to headline a country music festival, something that has not been prevalent at many other country events where, more often than not, American artists still dominate.

We are also proud of the fact that out of six headliners over two years, five have been female led. Again, this is something not achieved at many other country festivals in either America or the UK. We signed up to PRS Keychange initiative committing to 50:50 gender balance in our programming by 2022. We achieved it in our first year, back in 2019. We have not had to shoehorn them in, they have all been there on merit and it shows what a wealth of incredible, female singer-songwriters we have in Great Britain.

All the artists that performed in year one at TBCMF definitely increased their fanbase, with managers and agents confirming new fan faces they had not previously seen at other UK festivals. Some performers were also offered bookings for other events by promoters who attended TBCMF.

Every year we have hundreds of applications from artists, agents and managers. We listen to every submission and we could fill the stages twice over. As the festival grows, we will add more stages to give more artists a springboard for their careers. Some of our support artists will be headlining within a few years and it is so rewarding to see that growth and help them along that road.

We are keen that we promote homegrown singer-songwriters who are authentic to their roots and have their own voice. We don’t include UK artists singing in a strong American drawl or referencing saloons and sidewalks.

From a programming point of view, we are not blinded or snobbish at all by the sub genres of country. We are a broad church, and happy for country pop to sit alongside country rock. I think this was reflected in the diverse, music loving audience who risked coming in year one to what was then, an unknown festival.

With TBCMF being held in Blackpool, the event has introduced contemporary, country music to a broader audience with visitors travelling to the resort for the festival and then staying for an extended holiday from literally all four corners of the UK. Blackpool is easily accessed from Scotland, Ireland, the Northeast, Midlands and London via the public transport network and motorways.

Martin and I live locally in Lytham and whilst we have previously promoted festivals and produced theatre shows in other regions, we wanted to bring something back to our hometown that benefits the local economy.

We believe we have the most beautiful, breath-taking venue in the country with our main stage in the candle-lit, gilt Empress Ballroom at the Winter Gardens. The music and venue are a marriage made in heaven. All four stages are indoors so people can dress up, keep warm and dry and stay in local bed and breakfasts, hotels or camper vans.  We also attract a lot of single females and first-time festival goers, because they feel safer in an indoor venue and it is a more protected environment in which to make new friends.

What are you most looking forward to at this years festival?

A return to sharing the live music experience is obviously top of the list.

I am particularly excited about the strength of our programme and support artists. Robbie Cavanagh, Blue Rose Code, Hayley McKay, Cormac Neeson to name but a few, will bring so much joy to our festival goers. All the support stages will be amazing as they include the cream of country and Americana and represent every part of the UK.

I am also looking forward to welcoming back so many people that have stood by us, retaining their tickets from 2019. This will be a great thank you for their support. All our VIP tickets sold out early on, so year two is looking very positive.

We know how much advanced planning goes into these festivals, what are your long term plans for the festival?

Running a festival is mostly risk management and our approach was to start “boutique” and grow organically. There are a lot of rooms in the Winter Gardens complex that we have yet to use, so there is plenty of room to grow. We would like to increase the number of stages, but we will do that in a measured and viable way.

We also have a number of initiatives that we will be introducing prior to the festival next year that will benefit songwriters.

Our main aim will continue to be helping to grow and nurture UK country artists. By playing at TBCMF, this helps give confidence to other festivals and venues to book these artists and there is no greater joy than seeing an artist on a support stage this year, go on to headline the main stage just a few years later.

The earliest roots of American country music were hugely influenced by settlers from the UK. We are just taking it full circle and encouraging that collaboration loop to continue. The UK has always punched above its weight in the global music industry and it is now time for UK country artists to take their rightful place alongside their American counterparts.

The Americans do country well, we just do it different.

The British Country Music Festival is promoted and curated by Marina and Martin Blore from Fit The Bill Limited www.fitthebill.com

Visit the website HERE for more information on the line-up and to get your tickets!