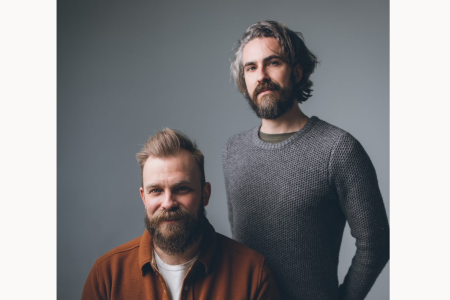 With a string of single releases already this year, The Bros. Landreth have been winning acclaim from the likes of MOJO Magazine, Maverick Magazine and Americana UK and many more, plus radio support from BBC Radio 2.  To celebrate the release of the album the brothers release another new video, this time for the brilliant “Don’t Feel Like Cryin” featuring Leith Ross.

The most immersive, emotive record of the Landreths’ career, ‘Come Morning’ finds brothers Joey and Dave lacing their melody-driven songs with layers of atmospheric synth, organ, and textured guitar. The group’s previous albums shone a light on their strength as a live act, capturing the spontaneity and sonic stomp of a band of hard-touring road warriors. If those records unfolded like snapshots of The Bros. Landreth’s night-time shows, then ‘Come Morning’ sketches a markedly different picture, showcasing the introspection and clarity that comes with a long period of rest.

Forced to keep a tight circle due to Covid restrictions, Joey and Dave made ‘Come Morning’ in near-seclusion, pulling long hours in the studio and building songs one instrument at a time. They recorded, layered, stripped away, and layered again. Sounds were sampled, re-sampled, and twisted into something new. Prioritizing moody textures over fiery fretwork, Joey took an understated approach to the guitar, saving his big solos for key moments. He placed an equal emphasis on keyboards, beefing up the recordings with Hammond organ and analog synth. Slowly, steadily, the Landreths pieced together a transportive album built for the heart, the head, and the headphones. This time, the songs weren’t the only thing telling a story; the sounds told a story, too.

This record marks a new dawn for The Bros. Landreth, whilst featuring appearances from Leith Ross (whose 2020 debut was released on the Landreth’s record label, Birthday Cake) and drummers Aaron Sterling and Daniel Roy, at the album’s core are the Landreths themselves: two born-to-collaborate brothers who sing songs about hard truths and new beginnings, having been brought back together during a time of unprecedented isolation.

READ OUR REVIEW OF THE NEW RECORD HERE!