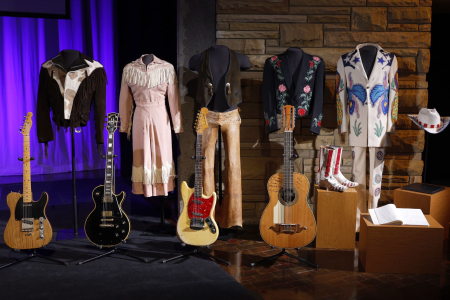 There is always something new, cool, and historic going on at the Country Music Hall of Fame and Museum in Nashville, TN and that includes their latest exhibit.  Western Edge: The Roots and Reverberations of Los Angeles Country-Rock.  The title alone gives you an idea of the extent of this undertaking and why it will be open for a three-year run.  To cover this much musical ground the hall needed a massive space so the exhibit will be housed in the recently updated 5,000 square foot gallery that opens September 30th.  The goal is to showcase some of the many aspects of the LA based songwriters, singers, and musicians from the 1960s through the 1980s that played country music and mixed it with rock.  The repercussions of which are still heard today in popular music.  Featured artists and bands will include the Eagles, Poco, Byrds, the Flying Burrito Brothers, Nitty Gritty Dirt Band, Emmylou Harris, Buffalo Springfield, and Linda Ronstadt.  Plus, other artists that successfully melded country, rock, and bluegrass into a singular form of music.  The next generation of forward-thinking artists in Los Angeles, California spawned Los Lobos, Dwight Yoakam, the Blasters, Rosie Flores, and Lone Justice. They took things even further by embracing Mexican folk music, honky-tonk music, rockabilly, and punk music.  To announce the exhibit in June the Country Music Hall of fame featured Grammy award winning artist Dwight Yoakam and country-rock star Chris Hillman performing from the Troubadour in LA.  In the museum’s Ford theater in Nashville CMHF member Emmylou Harris performed “The Road” a tribute song to Gram Parsons.  She was joined by Nashville local Jeff Hanna founding member of the Nitty Gritty Dirt Band and songwriter Matraca Berg who played “Mr. Bojangles.”  More than 40 hours of filmed interviews have been cultivated by the museums curatorial and creative team for this exhibit.  Other artifacts on display will be period correct instruments, stage wear, original song manuscripts and interactive elements to explore.  Original interview footage, performance clips, historic photos and audio recordings will be available to engage with throughout the displays.  A multitude of musicians and songwriters were pulled to Los Angeles during the 1960s thanks to the youth counterculture of the times.  Ash Grove was one of the many popular music clubs that showcased up and coming bluegrass bands like the Kentucky Colonels and the Dillards setting the stage for what is now American Roots music.  In West Hollywood the Troubadour venue drew in songwriters and artists with some friendly musical competition mixed in with the instrumentation and harmonies.  A Western Edge:  Los Angeles Country-Rock in Concert will be held at the CMA theater in the Hall on Friday, September 30th at 7pm central time in Nashville, TN.  The lineup will include Dave Alvin, Alison Brown, Rodney Dillard, Rosie Flores, Jeff Hanna, Chris Hillman, Bernie Leadon, John McEuen, Wendy Moten, Herb Pedersen, John Jorgensen, JayDee Maness, Steve Duncan and Mark Fain.  More performers are to be added and hopefully this concert will be uploaded to the Country Music Hall of Fames website after the live performances.  On Sunday October 2nd at 7pm the famous Desert Rose Band will be reuniting for a performance for the first time in more than a decade.  As if all of this wasn’t enough there will also be a extensively researched book released covering the exhibit.  The Hall will also be supporting educational programs with the exhibit to educate youth groups.  During the 1970s and 80s many people took Country-Rock for granite and only years later realized the impact that this genre of music would have on future musical artists. Western Edge: The Roots and Reverberations of Los Angeles Country-Rock is a don’t miss exhibit and I’m certain there will be more performances planned around it’s three years stay at the hall.  You’ll definitely want to plan on spending some time to fully immerse yourself in the Country-Rock music and the artists that helped shape this magical merging of music styles that is still popular today.  If you are coming to Nashville, TN go on the Country Music Hall of Fame and Museum’s website to get your tickets early.  I have a feeling this exhibit will be drawing big crowds and you never know who you might see or bump into while you’re at the hall?