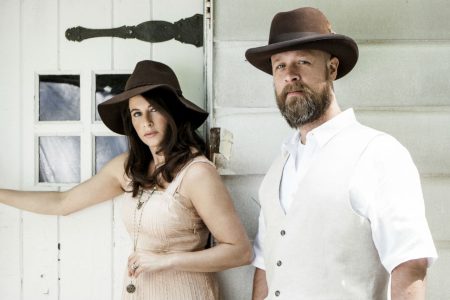 There is a special connection between American folk music and the railroad that has no parallel elsewhere in the world. Rail lines stitch together the sprawling fabric of American song. As writers of Americana music, our goal is to draw on the deep, recurring sources of American folk culture, giving them new shape. The Grahams Alyssa and Doug Graham have spent most of their lives exploring music together. The two were friends since she was 7 and he was 9, became a couple in their teens, then husband and wife and The Grahams, a dynamic Americana duo. Their first song-crafting journey, along the Mississippi’s Great River Road, became their 2013 debut, RIVERMAN’S DAUGHTER. For its follow-up, they rode the rails – and ended up recording not only a new studio album, the aptly named GLORY BOUND, but also ‘Rattle The Hocks’, a documentary filmed on the move and in venues from Sun Studio to Amtrak’s famed City of New Orleans train, produced and directed by Cody Dickinson of the North Mississippi Allstars, which chronicles their train-bound excursions and the influence of train travel on American roots music. The Grahams teamed up with Grammy nominated producer Wes Sharon (John Fullbright, Parker Millsap) at his 115 Recording studio in Norman, Oklahoma and collaborator-since-childhood Bryan McCann, to capture the rhythms and energies of that transport system and the momentum of its time, with Doug’s masterful resonator slide-work and harmonies fuelling Alyssa’s locomotive voice and acoustic guitar chords, while producer Sharon was able to bring in guests of the calibre of John Fullbright, Byron Berline (Bill Monroe, Flying Burrito Brothers, Dillard & Clark, Stephen Stills), one of the world’s premier fiddle players, and Ryan Engelman and Gabe Pearson of the Turnpike Troubadours. Our methodology is to follow the paths and revisit the places that inspired our predecessors, not because we want to imitate them or faithfully reproduce their work, but because we are looking for the modern echo of older sounds, and hope to give shape to these enduring reverberations. Nothing can serve that methodology better than riding the rails. Tour Dates: Tue Nov 3: Norwich, The Bicycle Shop Wed 4: London, The Borderline Thu 5: Axminster, River Cottage Fri 6: Bath, Chapel Arts Centre Sat 7: Stroud, The Convent Sun 8: Exeter, Exeter Phoenix Tue 10: Shrewsbury, Henry Tudor House Wed 11: Leicester, The Musician Thu 12: Bury, The Met Sat 14: Lewes, The Con Club Tue 17: Ballydehob, Co. Cork, Levis Corner House Wed 18: Limerick, Dolan’s Thu 19: Galway, Monroe’s Live Fri 20: Belfast, The Errigle Inn Sat 21: Naul, SÃ©amus Ennis