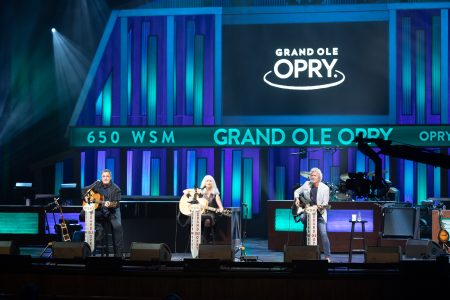 The Grand Ole Opry holds a special place with Country Music fans, Country Music Artists & bands and the people of Nashville, TN. As mentioned in previous Maverick Country articles, a visit to Music City isn’t complete unless you see at least one live show at the Opry.

The Pandemic that began in 2020 changed the entire world including the Grand Ole Opry and her regular performances. Instead of stopping the music, the Opry made the bold decision to stop permitting live audiences inside the building back in March of 2020. For 29 weeks the Saturday night Opry shows continued to broadcast to more than 100 countries reaching over 50 million people with their music and performances. Some of the biggest stars in Country Music were left performing to an empty room. This included Emmylou Harris, Luke Combs, Reba McEntire, Brad Paisley, Carrie Underwood, Keith Urban, Molly Tuttle and Ricky Skaggs, to name a few.

In celebration of this achievement the Grand Ole Opry is releasing a Limited-edition LP Vinyl record named “Unbroken – Empty Room, Full House.” The first 1,000 copies of the album will include a special edition Hatch Show Print suitable for framing. The collection of songs is led off by Country Music Legend and Opry champion Marty Stuart with “No Hard Time Blues.” A total of 60 artists took part in the Opry Pandemic performances.

This past October 3rd 2020, the Opry celebrated it’s 95th Anniversary with a socially distanced small audience. This coming October 30th, 2021 will mark the 5,000th Saturday night broadcast of the Grand Ole Opry live show. There is so much history that runs through the veins of the Opry and the music that has resonated there, but the tradition and heritage can’t live on if the music doesn’t play.

Thanks to Dan Rogers, who is also the executive producer of this album, the Country Music that helped us all stay positive during the Pandemic can now be heard again. Songs on “Unbroken – Empty Room, Full Circle” include cuts from Reba, Dailey & Vincent, Trace Adkins, Darius Rucker, Billy Strings and Dom Flemons. A total of 10 songs are on the album several with A-list Country artists performing together. “Unbroken – Empty Room, Full Circle” will be available at Opry based retailers in Nashville and online at the link below. Step into the circle and relive the music that helped sustain us.