The Honeycutters release 4th studio album ON THE ROPES 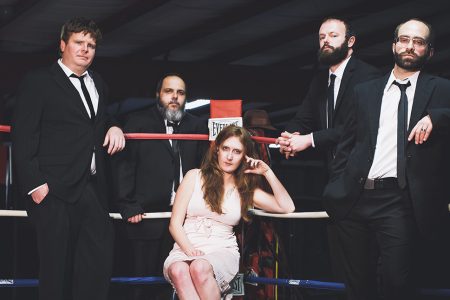 The Honeycutters have a voice you can’t ignore; a voice of persistence, of struggle and of hope, a voice that leads the new music movement erupting out of Asheville, NC. The band have released their 4th studio album ON THE ROPES on Organic Records, Nashville’s Music City Roots’ Craig Havighurst says principal songwriter and frontwoman, Amanda Anne Platt “has a voice that’s complex, sweet and aching. Even more potently, she writes songs that folks are citing as up there with the best of the field, such as Mary Gauthier and Lucinda Williams.” On The Ropes was produced by Amanda Anne Platt and Tim Surrett and engineered and mastered by Van Atkins at Crossroads Studios in Arden, NC.
In ON THE ROPES Platt continues to bring songs of heartache, yearning, and comebacks using phrases so relatable you wish you had thought of them yourself, ”Love ain’t ever black and white, it’s pink and gray and blue besides” (“Blue Besides”).
Platt’s writing is always personal. The title track, “On The Ropes,” is a rally song about coming back from hard knocks. “When I’m down for the count there’s a voice I can’t ignore,” like a continuous conversation with herself, pushing her along and encouraging her to make “something out of nothing.”
In a recent interview with David Dye of the World Cafe, Dye pointed out Platt’s string of songs with ‘love gone wrong’ themes. Her response, “Doesn’t everyone have stories of love gone wrong?” Part of Amanda’s significance as a songwriter lies in her ability to write everybody’s story and allow each listener to feel it’s theirs alone. She shares songs of love and loss, songs of struggles and fears; in “The Only Eyes” Amanda writes, “If there were an easier road that wasn’t so crooked, Honey, I hope you know I would have took it.” NPR’s World Cafe, produced by XPN in Philadelphia, brought the show to Asheville’s The Grey Eagle this February for a sold out evening of entertainment including The Honeycutters in their “Sense of Place” series. Folks can listen in to The Honeycutters’ World Cafe segment at http://bit.ly/TheHoneycutters_WorldCafe.
The power of Amanda’s songwriting requires musicianship with the kind of edginess needed to match it, to cohesively surround the lyrics in just the right skin while still shining in their individual performances.
Joining Amanda Platt to round out The Honeycutters are Rick Cooper, alternating between upright and electric bass, accentuating the band’s delve deeper into a rock sound blending with their old-school country roots attitude. Along with drummer Josh Milligan the two create a powerful pocket and groove that locks the album together, with Milligan’s vocal harmonies complementing and enhancing Platt’s lead. The pedal steel work of Matt Smith brings unexpected rock licks on an instrument traditionally reserved for a classic country sound in tracks like “Blue Besides” and “Only Eyes”. Smith also shows his prowess on electric guitar with rock, and R&B flavored runs and solos like in “Golden Child”. Tal Taylor’s mandolin cuts through with bitey, bluesy notes and fierce tremolo that pushes the instrument beyond its obvious folk appeal.
ON THE ROPES has thirteen tracks of all original material with the exception of Leonard Cohen’s “Hallelujah,” a song Amanda has been playing since before she moved to Asheville. She says, “We’ve had a number of people ask us to record our version, so here ’tis.”
A special vinyl edition of ON THE ROPES released April 12, 2016 on Vinyl Tuesday, as a featured national release for Record Store Week. It is a double album released through Organic Records®’ national distribution partner Select-O-Hits. “This here record store is Amanda Anne Platt country, and her new album On The Ropes with those masters of gritty roots-rock The Honeycutters is our new national anthem. Packed with incisive lyrics, unforgettable hooks and just the right balance between rock oomph, country heartache and singer/songwriter incisiveness, this is a must-have album is Appalachian honky-tonk with heart and guts,” writes Horizon Records out of Greenville, SC.
ON THE ROPES builds on the critical success of The Honeycutters breakout album Me Oh My [Organic Records 2015], which appeared on over twenty “2015 Year End Lists” including nods from No Depression, “It’s the type of country music you’d play on the jukebox and take a spin on a red dirt floor” and Cleveland Scene, “an upbeat symphony of regret, redemption and resurgence.” The album was voted #3 on WNCW’s Top 100 Listeners Poll (Under Jason Isbell and Alabama Shakes), listed in NPR’s Folk Alley’s Top 50, and was one of KBCS’s “Most Played Albums of 2015.”
In their “50 Essential Albums for 2015” list, Saving Country Music writes, “Me Oh My is the 14-song testament that you sense could be the centerpiece of her career when it’s all said and done… This is a band, an album, and a songwriter that both the Americana and country world should pay greater attention to.” Me Oh My launched The Honeycutters onto the national stage, bringing along an army of fans with them. Don’t blink now, they’re coming back for more.
It has been said that overnight success is a result of long time dedication and hard work. Amanda writes, in “Golden Child,” her love letter to the music industry, “Now I don’t mind if it takes a little time, when it comes to waiting I’ve been practicing for years.”
Song Premier: LISTEN: The Honeycutters, “Blue Besides” at The Bluegrass Situation → www.thebluegrasssituation.com/read/listen-honeycutters-blue-besides
Pre-order at iTunes
Get the vinyl at Tower Records, Select-O-Hits, and Amazon
Stay tuned to www.TheHoneycutters.com, www.facebook.com/Honeycutters, and twitter.com/thehoneycutters.