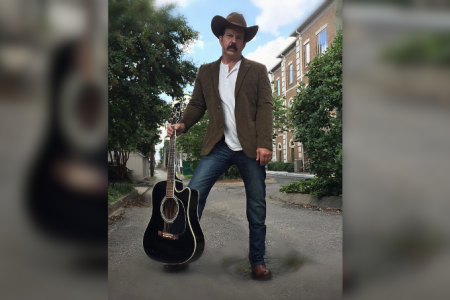 Speaking as someone with a lot of experience around the scene, how do you feel about the changes that we are seeing in the music sector?

It depends, you know. There’s a music scene from different regions, and a lot of different places, and then there’s the Nashville music scene.  The Nashville music scene…in all honesty, is a business. It’s about money, it’s not about art – it’s about a bank.
When I come to places like Millport, it really is heartening to me. I enjoy it because I come to the UK, and I see a lot of artists over here, going out, doing what they do and being true to themselves, and to me that’s what it’s all about.
The thing that I’m glad to see here again is that the UK are still supportive on roots – it’s something you don’t see in America.
I think the music scene in America has, in my opinion, become way too commercialised and has taken a lot away from it. I don’t see that as much here.

I think a lot of people in the UK are just starting to tune into country, Americana, and bluegrass, so that’s quite refreshing to hear…

I’ve noticed. I’ve been touring the UK, on average, twice annually for a decade now, and I really believe even more so than when I first started that I see more and more opening up over here.

From what I can gather – and this is from a very good source – a lot of the competitions on the TV already know the outcome before they begin, and that’s sad.  That’s really sad.
The audience really pull for people, and it doesn’t matter as the companies already know who is going to win. That is a shame – the need to deceive people and turn it into everything about the money.

Using the word deceive and music in the same breath, it kind of feels alien.

They don’t even fit. They should never fit together.

Going back to you, you had a Grammy nomination fairly recently…

Yeah, I was very honoured. It’s something I never really thought would happen.  To me I’m grateful, and I really didn’t see this one coming, but I don’t think that makes me any better than any other artist.
My name just got thrown in the hat and I happened to get plucked out as a nominee. I’m very grateful for that, but that doesn’t make me better than the next.

That’s a very humble approach to take. Can we expect any new music from you soon?

I do, I’ve been writing some new things.

Have you got plans to get into the studio?

Yes, I will be heading back to the studio in the spring to record.

So, can we expect something towards the end of next year?

Absolutely. If nothing goes wrong, I will have an album released in the fall of next year.