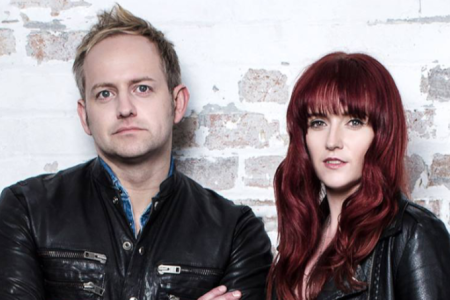 Scottish act Raintown were immensely popular at Millport Country Music Festival, and they spoke to Maverick after their set to discuss their future plans.

What’s next for Raintown?

Claire McArthur-Bain: We don’t have any more shows booked in for 2018 because back in the summer, we were working with a consultant from Nashville and our management and we were instructed to go for a break for writing. So now, we’re going to write and record the third album.

Claire: It’s very exciting. For us, it’s a challenge not to be thinking about playing because we love playing – we love being on stage, but at the end of the day, we have to think about getting the third album out so we can go out and play that again for more tours and shows next year.
Paul Bain: We’re always writing down ideas, but now it’s very much a structured approach to specifically write at least every other day as we have a child now. We make time for writing, and we’ve set up a number of co-writes as well, which we are excited about, with very different writers.
Everybody is a bit different and has their own spin on what is country to them, which I think could be interesting. And it will just be interesting to see what we can come up with for this third album.

Claire: That’s what the consultant from Nashville was saying, she was saying it is not a bad thing to come off the road. I know as an artist it feels like it is, but you will have new things to play, new material to get people excited about, and to go back out again.
Paul: It also means you’re not thinking about trying to get people to come along and ways to advertise your music. Because we are effectively independent – I mean, we have management in London – but we are independent artists, and that means you can take care of your own stuff and take care of your own business.
Claire: We organise everything really – from the touring, to the writing, to the band…we organise everything. A lot of other artists find it easier to write on tour, but we actually don’t. We don’t find it easier to write on tour, so we need to have the focussed hours of doing it.

In terms of your material, what direction are you heading with your next album?

Claire: There are parts of it that we are still deciding on, but we’ve been doing a mixture of different things.
Paul: We said before we went out with this one, ‘let’s just write whatever’. In previous albums, we’ve probably had more of an idea because there’s been one song that has started the process.
For example, we were in some studio Memphis and I said to the guys and Claire, ‘I wonder if they knew when they were doing this music that they were going to change the world with it’. Like, did they see the writing on the wall? And that started a whole process of conversation and songs.
Claire: Inspiration for the songs came a lot from that one trip. A lot of the album was based on that trip, so that did have a specific sound to the record, but this time, we get different things to write about.
Paul: And that radically changes your viewpoint on so many things. It’s the fact that your perception changes and that’s what you want to write about, because something happens. For us, it was having a child, how your emotions change and how you react to things differently.
The one thing is that will remain the same, from now until the end of Raintown, is that we will write about what we know. And for Raintown at the moment, I think the songs all represent this time of change and growing.
Claire: We are excited to see where it’s going to go as well. Usually we have everything all mapped out in our heads – for example, how we want to sound, what songs we’re picking, what the order is…but we are going in a bit blind this time, and deliberately so.