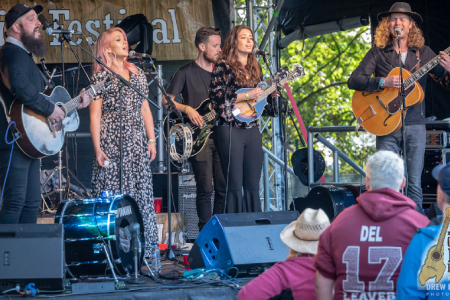 The latest interview taken at Millport Country Music Festival is with a band who are very much on the cusp of greatness in The Wandering Hearts, and the four-piece discuss their upcoming tour, lyrical content and new music.

You’ve got quite an expansive UK tour coming up soon…

Tara Wilcox: We kick off in Brighton in November, and it’s so lovely. We are going back to some of the venues that we played on the last tour we did, and we’re also hitting some cities that we didn’t get to play, including Dublin! We’ve not been to Ireland before.
We’ve met people that are buying tickets, and it’s really exciting. We’ve sold out a couple of venues already.
Chess Whiffin: We’ve got the amazing Ruston Kelly supporting us and our wonderful friend Fiona Bevan, so it will be a really cool evening of varied music.

Your lyrics very much seem to be an outpouring of emotion, do you find that draining at all? Or is it therapeutic in a way?

Tim Prottey-Jones: When we got together we didn’t really know each other very well – we were more or less strangers. And so, writing together, which we did straight off, required us to be very open and sharing with each other.
A lot of personal experience went into that, and a lot of imagination as well, but it was a really good way of us getting to know each other, and it was kind of therapeutic.
Chess: It’s quite cathartic, I think, the whole song writing process – I never come away feeling drained by it.
Tara: You feel closer and it’s how you make friendships. In my experience, you end up making good friends. Someone has a hard time and you go ‘I relate to that, because this happened’, and it broaches some kind of common ground, and you realise you’re not the only person feeling that way.
We have that as a forum and what is so lovely is that seems to connect on a wider level, because someone hears a song that we wrote, that means something to us, and they go, ‘I’ve been there, and I’ve done that’.
That’s the coolest thing for us, when someone goes, ‘this helped me out of this situation’, and we’re like, ‘that’s good!’

It does seem a very big leap to do that with four strangers.

AJ Dean: That’s the only way you can really do it – if you’re going to start writing, you’re going to start writing stuff that matters to you. You’ve got to discover what means what to each other, and before too long you’re having those conversations that are deeply personal, and you’re learning a lot about one another in quite a short space of time, which has been really good for us.

Generally speaking, do you think there’s enough time spent on lyrics these days?

Tim: Hmm…I think that really depends. Yes and no.
Chess: I think in country music more so than anything else, yeah.
Tara: It’s difficult though with other genres, because I listen to some really successful minimalistic pop and there’s some great stuff, but sometimes lyrics can be super poignant. It might just be one phrase repeated, so that whole thing, I think, is quite subjective.
AJ: Definitely, and also there’s a skill in how they succinctly use something simple that can be very powerful. This is more the case in pop I think, as a lot of the mainstream pop that you hear can sometimes not have that much going on lyrically, but then what they do have manages to be so catchy, hooky or powerful, that you go, ‘oh my god!’ All you need is that phrase there.
Tim: We are utilising that too, and that’s maybe where the more commercial stuff comes into our lyrics.  You can have really descriptive verses, or whatever, and then you just get this hook that is something that says it all.

When your UK tour comes to an end, what are you doing then, heading back into the studio to record new stuff, or on the road in Europe?

Tim: Hopefully all of the above!
Chess: Yeah hopefully we will get to do it all, we will try and maybe get over to Europe soon, maybe even before the end of this year. If not, definitely next year is the plan, and we’re writing a lot so we will be in the studio hopefully recording it for the New Year.

Do you think you will have anything out before C2C?