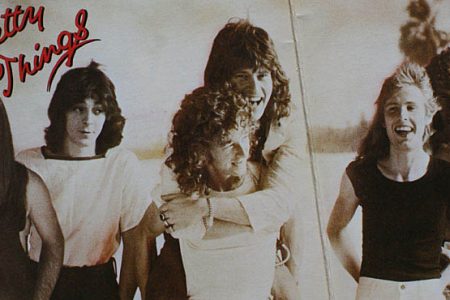 LIVE AT THE BBC

Now the Pretty Things are far from a country band, yet the wild, pained sounds the band made – and make still – put them in a category of heartfelt acts, unfettered by style or current fancy, that draw a direct line from historic blues and the early days of Nashville. They’re not unlike the Stones in the way their music has evolved and metamorphosed in cavalier fashion over the years, led always by singer Phil May, almost always teamed with guitarist Dick Taylor

They were treading the boards of London in the mid-Sixties at the same time as the Downliners Sect, who took a ground-breaking country rock path, but the Pretty Things went their own crashing way. As 1960s hits that inspired David Bowie, and not in a folk way (Rosalyn), gave way to glorious low-fi 70s rocking, the Pretty Things established themselves as a classic bar band, never standing still nor slipping into complacency.

Here there are three cracking re-releases (with a dozen bonus tracks) plus the new 4CD, 60-track BBC set.

In 1974, hit-making years behind them, the band were signed to Zed Zeppelin’s SwanSong label and produced SILK TORPEDO, a record destined to break them in America with its blend of AOR-tinged rock (in the best possible way), name-checking places (the southern rocking Atlanta), making like the Stones on EXILE ON MAIN STREET (Singapore Silk Torpedo) and even a bit of Brit country (Belfast Cowboys).

SAVAGE EYE (1976), also on SwanSong, is the band’s most open and US-accessible record, and the one that would have cemented them as transatlantic stars if there hadn’t been the kind’ve drink, drug and personality meltdown to crown them all. From the opening rocker, Under The Volcano, through the gentle, acoustic Sad Eye and the radio-friendly It Isn’t Rock ‘n’ Roll it’s all there. Both come with half a dozen extra tracks.

The band disappeared and reappeared several times. BALBOA ISLAND, from 2007, is the album where the band and roots rocking truly come together, a dark and guttural record, Johnny Cash’s AMERICAN RECORDINGS meets Led Zep’s PHYSICAL GRAFFITI. Self-penned numbers such as the mighty, eight-minute railroad romp (Blues For) Robert Johnson and the wild rocking The Beat Goes On (with Mexican borderlands trumpet blasts) sit alongside the angst-filled traditional Freedom Song and Dylan’s, The Ballad Of Hollis Brown, bleaker than he ever have imagined.

It was eight years before the band would record again, 2015’s THE SWEET PRETTY THINGS (ARE IN BED NOW OF COURSE), another glorious, rip-roaring affair.

The sessions set features well over four hours of music which takes the band from their earliest r ‘n’ b days through psychedelia and into Stones-like rocking over a decade, from Saturday Club to John Peel and the Whistle Test

They might not be country, but if you listen to Zac Brown or a lot of other modern country acts, you’ll find a lot of similarities. But wilder.