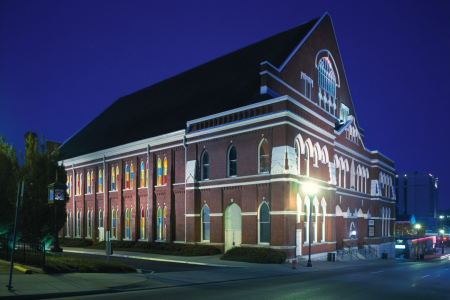 I have attended the Ryman Auditorium, in downtown Nashville, and been witness to the music of B.B. King, Tommy Emmanuel, Victoria Justice, Dodie and the comedy of Jim Gaffigan. This year the Ryman celebrates its 130th anniversary from humble beginnings in 1892 to the Mother Church of today. Of all the incredible venues to absorb live music in Nashville nothing is better than sitting in the wooden pews of the Ryman and feeling that you are a part of this historic institution.

To mark this milestone event there will be additions to the daytime tours, community events, residencies and of course many special concerts. The Ryman Community Day will be held in May with special pre-show events and plans for the PNC plaza. Residencies are currently planned for Dwight Yoakam (Jan 19-21), Billy Strings (May 6-8) and many more to be formerly announced. Some of the major concerts will include The Beach Boys, Trace Adkins, Yola, Bonnie Raitt, Gladys Knight and the Black Pumas.

Although known for Country Music, as the former home of the Grand Ole Opry from 1943-1974, the Ryman has welcomed many different genres of music and entertainment in its long history.  The first concert was held on May 4th 1892, and since then it’s stage has seen the likes of Charlie Chaplin, Harry Houdini, Martin Luther King Jr and former US President Theodore Roosevelt. Music acts that have performed there range from Sheryl Crow, Johnny Cash, Harry Styles, Patsy Cline and Garth Brooks. Virtually every show at the Ryman sells out and it typically hosts 200 shows per year and is the Number one theater for concert ticket sales worldwide per Pollstar.

The Ryman Auditorium was built by Captain Thomas G. Ryman and was originally the Union Gospel Tabernacle. What started out as a church evolved into a symbol of music and hope and a goal where every music artist eventually hoped to perform one day. Television shows and movies have been filmed inside and around the Ryman including The Johnny Cash Show, Coal Miner’s Daughter, Nashville and American Idol.

Having stood backstage and walked on the stage to conduct interviews with artists in the past you feel a sense of reverence at the Ryman. I don’t know if it is knowing that you are standing on the same wood that legends stood and performed or of the great history that permeates the building. When I first moved to Nashville, I took my family backstage during a special Opry performance and The Riders in the Sky sang Woody’s Roundup for my daughter before they went on stage.

I highly recommend the day tours to really understand the full history of the Mother Church.  They have also taken to curating excellent historical displays with instruments in cases at the top floor. Attending a concert or entertainment show is a must at the Ryman when you visit Nashville. Inside you will see statues of Roy Acuff and Minnie Pearl on a bench in conversation. Outside there are life size statues of Little Jimmy Dickens and Bill Monroe who were both influential in the popularity of the Ryman. In 2020 a statue was erected of Country Music Legend Loretta Lynn to commemorate her debut performance there 62 years ago. And of course, you should have something to remember the original founder of the Ryman with Captain Thomas Ryman watching over your entrance.

History, music, entertainment and nostalgia are all pieces of the puzzle that make the Ryman Auditorium such an architectural icon. Come celebrate the Mother Churches 130th Birthday this year, you won’t regret it!