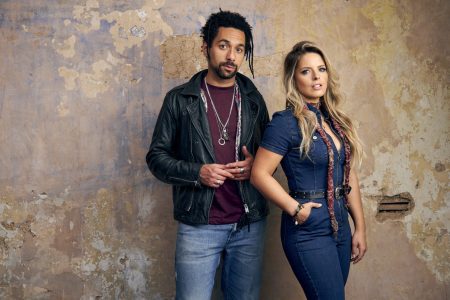 The Shires announce the release of their soul-stirring new album ‘10 Year Plan’ out on 11th March 2022 and launch it by sharing its lead single ‘I See Stars’.

Premiered on Zoe Ball’s Breakfast Show on Radio 2 this morning, ‘I See Stars’ is symbolic of The Shires’ pop-orientated, crowd-pleasing, full-passion, global-facing take on the country tradition. The duo’s Ben Earle wrote the song with Jeff Cohen (Jake Bugg, Mandy Moore, Sugarland), who previously collaborated on their fan favourites ‘Daddy’s Little Girl’ and ‘A Thousand Hallelujahs’.

Ben says, “We love the Coldplay/‘Greatest Showman’ vibes on this! it’s not trying to be clever, it’s just really uplifting and big and positive. It’s another one that has arena vibes – I can picture us being up there on a massive stage with everyone singing along.”

‘I See Stars’ is a bold introduction to ‘10 Year Plan’, a collection of songs which takes all of The Shires’ biggest influences and condenses them into one cohesive, confident record. Its title harks back to their modest goals when they first started back in 2012.

As Crissie Rhodes reflects, “We wanted to get our music to Bob Harris, and we wanted a thousand Facebook followers. At the time that seemed crazy, but Ben was committed to it.” He was proven right, as Chrissie continues: “The number of people enjoying country music has exploded in the UK, but it still feels like an undercurrent. Even recently, we’ve had people come to our shows and say they were surprised, because they didn’t think country was for them!”

From the early Taylor Swift / Lady A country-pop euphoria of the opener ‘Cut Me Loose’ to the classic pedal steel guitar of the timeless closer ‘When It Hurts’, ‘10 Year Plan’ demonstrates that country delivered with ambition and accomplishment can cut through such stereotypes. In fact, that’s something the duo display on every corner, whether they’re layering their lush harmonies on ‘Sparks Fly’ and ‘Bar Without You’, collaborating with Beth McCarthy on the Civil Wars-tinged ‘Plot Twist’, or delivering rousing anthems such as ‘Skydive’.

Currently completing an intimate acoustic tour, The Shires will commence a major UK headline tour in April that culminates with a landmark London show at The Palladium on May 24th. Please see their website for a full list of dates and ticket details.