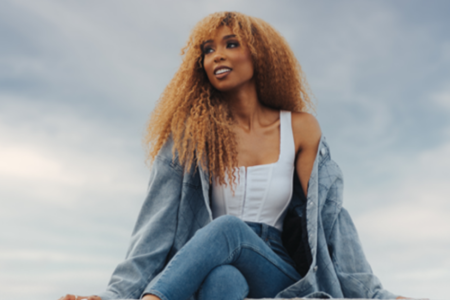 Tiera Kennedy has always represented the freshest takes on what it means to be young, free and alive. Whether it’s the sweet truth of her rising debut single “Found It In You,” the sensual sass of “Gentleman” or the down home pleasure of where she comes from “Alabama Nights,” the songwriter who found her muse outside Muscle Shoals, Alabama distills all the whirling joyousness of nightfall in the towns of her home state.

With a harmonica wailing, acoustic guitars setting a quick chop groove that cuts through a happy hour reverie, the smile cracks even before Kennedy even delivers the opening salvo of “Southbound 65, in a sweet home state of mind/ Halfway to Birmingham, goin’ back to where it all began…”

“Alabama Nights” is an easy shuffle that rocks back and forth, with the breezy sweep of hand surfing out the window. Dropping all the best pieces of how she grew up, the woman TEEN VOGUE praised for her “pure, catchy upbeat story-telling” delivers an ode to feeling good, loving where you come from and kicking it up with the ones who know you best.

“There’s something so easy about kicking back where I’m from,” Kennedy marvels. “You don’t always realize until you’re gone, and then it hits you. I love everything about my life right now, don’t get me wrong, but Alabama will always have my heart. The hometown football games, parking lot parties, family restaurant on main street – I wish I could go back and experience it all over again.”

Asking the biggest question in the Yellowhammer State: “Are you roll tide or a war eagle?,” Kennedy goes on to juxtapose query, “Downtown bars or white steeples?” in the frisky midtempo that could define the exuberance of running with your friends in most small towns across the country. To fully enjoy those simpler moments when you have no idea what lies ahead can give you the escape when life topples down later.

“The whole song is just a party,” adds Kennedy. “If you’re from Alabama you have to choose between Alabama or Auburn so it was really fun incorporating the ‘Roll Tide Roll or War Eagle’ part in the song.”

Produced by Cameron Bedell and Dann Huff, “Alabama Nights” has a sonic palette that lifts the melody up, but leaves room for the images to shine. Employing multiple ACM Award winners Ilya Toshinskiy on acoustic guitar and Derek Wells on electric guitar, plus Kirk “Jellyroll” Johnson on harmonica, it’s a track that’s full of light and spark. Whether drive-in double features, her mother’s cooking, cars with skipping CDs and even a little Bob Dylan, listeners can’t miss Kennedy’s lust for the smaller pleasures that can yield a pretty great life.

“Whether you got out or still live there, our hometowns made us who we are. I wrote ‘Alabama Nights’ about my neck of the woods but I hope wherever you’re from, this song reminds you of home,” Kennedy shares.

Available everywhere today, “Alabama Nights” is a full-on end of summer song to keep the mood lifted and friends coming together without missing a beat. With Nashville Scene proclaiming Kennedy “the total package… representing a writer who has learned how to write from their own voice at a young age,” this is a song to go back to school, work or just home to that’ll keep the best pieces of one’s innocence alive and thriving.