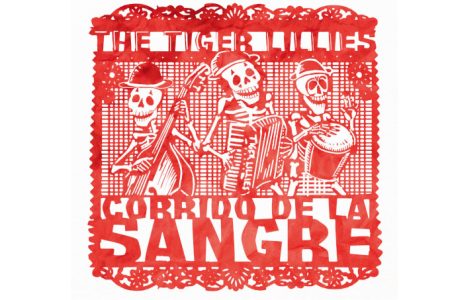 A Mexican setting provides the backdrop for this brand new cycle of songs and its stage show, as the Tiger Lillies embark on a Latin vacation that takes a turn for the worse.
Seemingly abducted from their latest touring performances, the band wind up in a disreputable outpost near the Mexican border, where the singer starts to tell his sorry tale.
In these story-telling songs, we hear about the tough life he suffered from the start, as a child accordionist playing bars to try and earn enough for a crust of empanada, before a couple of other lost mariachis joined him and together they were given an offer they couldn’t refuse: to sing the praises of the local drug lord.
Older now, his heart is inflamed by Maria, who is also being kept at the hacienda, and in his youthful passion he resolves to free her and demonstrate his noble spirit. But Maria is also loved by the wicked crone, who lays a curse on our hero, and thus caught up in such a web of intrigue and emotion there is no escape for him and his compadres.
Yet no story like this would be complete without revenge, and eventually we come to understand that the festival of the Day of the Dead is here to be taken very literally indeed.
Martyn Jacques’s singing and performance on accordion, piano, harmonica, organ, ukulele or guitar is accompanied as ever by Adrian Stout’s multi-instrument playing, on bass, euphonium and musical saw, plus sepulchral backing vocals; drum duty is handled by Andreas Winter, with guest spots from Jacques and also Tim Brockmann, the master of the mix. For that essential extra quality, Christian Krille plays trumpet on just over half the tracks.
‘Corrido de la Sangre’ is available now