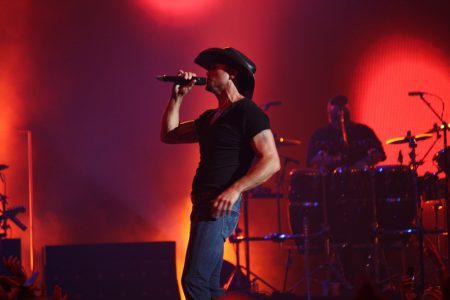 Country music star Tim McGraw has collapsed while performing on stage in Ireland as part of the Country to Country music festival.

The 50-year-old singer was mid-way though ‘Humble & Kind’ last night when suddenly he dropped to his knees, then sat on stage.
Staff rushed in to deliver medical attention and the concert was halted.

Addressing the crowds, wife and singer Faith Hill, came on stage to explain McGraw was “super dehydrated” before saying, “I apologise, but I made the decision that he cannot come back out onstage,” prompting cheers and applause.

A representative for McGraw later said in a statement: “Tim McGraw was suffering from dehydration in Dublin this evening at the C2C show. He was attended to by local medical staff on-site and will be fine. He and Faith thank everyone for their love and support and look forward to seeing their Irish fans again soon.”
McGraw had already performed on Friday night in London, as part of C2C’s three-day tour in various U.K. cities. He’s not scheduled to take to the stage again until May 31, when he’s on the bill for the Soul2Soul tour in Richmond, Virginia, alongside Hill.
The singer is one of the few country stars to speak out about gun control in America and has a personal connection to the Parkland school tragedy in which 17 students were shot dead.