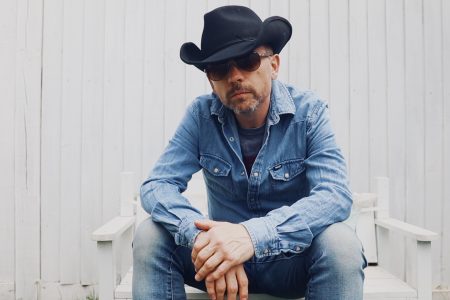 Multi-talented, singer-songwriter, guitarist and producer, TJ Walker announces his upcoming second album ‘Halfway to Somewhere’ and debuts its brand-new first single ‘With and Without You’. The song features TJ’s trademark cool, clever lyrics, his sweet guitar work; now aided and abetted by his band, plus an added brass section!

For his sophomore album, TJ Walker has broadened his genre horizons, without sacrificing his originality or love of storytelling in song, and given more limelight to the guitar.

Guitar features prominently on the new album, for a reason: “During my enforced break from gigging due to lockdown, I fell in love with playing the guitar for its own sake again.  Because I wasn’t out gigging several times a week, I had the desire and motivation to practice at home and started to make weekly YouTube videos about the guitar, which gave me a reason to practice!  As the album was recorded mainly during lockdown, there’s more guitar featuring than on the first album.”

Production went ahead despite the problems posed by COVID. As TJ explains, “The album was recorded mainly during lockdown; some elements were recorded remotely, and other parts in the studio when restrictions were lifted enough for them to open.”

“‘With and Without You’ is one of the more country-sounding songs on the album,” TJ reflects, “Genre-wise, you’ll find ‘Halfway to Somewhere’ broader and more varied than its predecessor: some of the tracks nod towards the blues, even classic rock at times, but all the time the lyrics are telling stories.”

Inspiration for ‘With and Without You’ came to Tom from giving a new spin to that classic country songwriting character – The Drifter: “The story told in the song comes from putting a twist into the notion of someone coming to terms with the fact they can’t live with or without someone. I thought it was funny that someone might be in a relationship with a drifter who won’t settle down for any time, so they were forced to live with AND without them all at the same time! I particularly like the lyric ‘…you’re gone again, everyone must think you’re my imaginary friend!’

Not only is ‘With and Without You’ the debut single from TJ’s new album, it’ll also be featured in a new musical called ‘Thank God for Nashville’, which features a brand-new original soundtrack and score and is set to be an exciting, melodic country rock musical for a new generation: a theatrical experience, all set in the Tennessee capital — Nashville, known as ‘MUSIC CITY USA’.

“‘With and Without You’ is part of the soundtrack for this exciting, melodic country rock musical,” Tom explains, “and will be showcased in the world premiere on 30th May at the Green Note in Camden, which is being hosted and narrated by BBC Radio 2 ‘s legendary country music producer and presenter Baylen Leonard.”