For a decade, the band built its fan base the hard way, through relentless touring and restless searching. When the time came to exit the Nashville ‘machine’ and find a new way to create and release the music they needed to make, they called on their die-hard fans for help. Hundreds of believers pledged tens of thousands of hard-earned dollars. Both humbled and exhilarated, the band hit the studio, eager to justify their fans’ love with the labor of their hearts and souls.

The resulting fourth LP, THE LIGHT is the statement their fans have waited for, with its songs of seeking and questioning, of reaching out to others, of excavating the hidden strength within. After years spent spreading their message across Texas, here at last is the vehicle that can take them to the national – and international – level.

Much about Uncle Lucius sets them apart. Five songwriters combining forces is neither common nor easy, but what each individual loses in pride the band more than gains in power. The song itself matters more than who wrote it, more than the genre to which it belongs. “It’s not about trying to write a certain kind of song,” says Galloway, “it’s about harvesting whatever song comes.”

Despite that organic method, THE LIGHT’s 12 songs share themes of travel, movement, and quests without destinations. The album places the band in unfamiliar sonic territory, and much credit belongs to producer George Reiff (Shinyribs, Ray Wylie Hubbard, Band of Heathens) for testing their limits. Every member influences every other, and that combined filter comes close to defining what Uncle Lucius is. “We’re a five-headed beast,” Galloway insists, “and our songs speak for us. Whether we succeed depends on how well they resonate in the world.”

Uncle Lucius’ single ‘Age of Reason’ is available now to stream via Soundcloud. 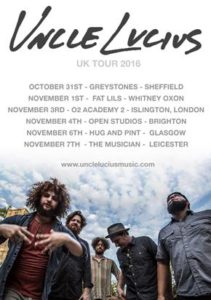