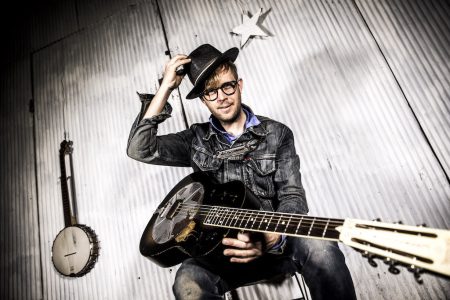 If you’re wondering where the music of Nashville troubadour WOODY PINES comes from, look to the streets. It was on the streets as a professional busker that Woody first cut his teeth, drawing liberally from the lost back alley anthems and scratchy old 78s of American roots music, whether country blues, jugband, hokum, or hillbilly. Heavy rollicking street performances are the key to some of today’s best roots bands, like Old Crow Medicine Show (Woody and OCMS’ Gill Landry used to tour the country in their own jugband), and they’re the key to Woody’s intensely catchy rhythms, jumpy lyrics, and wildly delirious sense of fun. Woody traveled all over the streets of this country, road testing his songs, drawing from the catchiest elements of the music he loved and adding in hopped-up vintage electrification to get that old country dancehall sound down right.

That’s why the songs on his new self-titled release WOODY PINES (released May 28 on underground label Muddy Roots Recordings) are so hot. This is gonzo folk music, the kind of raise-the-rafters, boot-shakin’ jump blues that used to be banging out of juke joints all over the South in the late 1940s, but now it’s burning into the earholes of a younger generation of Nashville kids, all looking for music with deep roots and something to hang on to.

It’s tempting to call Woody Pine’s newest music “rockabilly,” and in fact he recorded the new album at Sputnik Studios in Nashville, famous for recording rockabilly and psych-twang heroes JD McPherson, Jack White, and Sturgill Simpson. But it might be more accurate to call Woody’s new songs “hillbilly boogie;” a rarely remembered genre of American music made famous by the Delmore Brothers. Hillbilly boogie sits at the exact moment when the buzzed- out, electrified hillbilly country music of Appalachia (which itself drew heavily from country blues), first hit the sawdust-floored honky-tonks of old Nashville and Memphis. It was the moment exactly before the birth of rock ‘n’ roll. Woody writes with a wink to this critical time on songs like “Anything for Love” and “New Nashville Boogie,” drawing in modern references at will to make his points. He also dives deep into the tradition, drawing up gems like the old gangsta- folk song “Make It to the Woods” from the Mississippi Sheiks. In Woody’s music, there’s never an idea that roots music should be a recreation of an older time. Instead, he taps the vein of this music that’s still beating today, finding common ground with the old hucksters and bar-hounds who created the music in the first place.

When Woody Pines sings “when the train rolls by, I get a faceful of rain,” this isn’t some hipster dilettante twisting a faux-handlebar mustache and singing about old-timey railroads, this is a dedicated student of Woody Guthrie who used to hop freight trains to get from town to town. This is serious roots music that’s as much a way of life as an aesthetic choice. This music isn’t for dabblers; you gotta feel it in your bones. Let Woody Pines help.

“WOODY PINES IS THE BEST BAND I EVER HEARD IN MY LIFE I SWEAR…. I’M THEIR BIGGEST FAN NOW!” – BILLY JOE SHAVER

AMERICAN ROOTS UK  “GO AND SEE THEM, YOU WON’T REGRET IT”!

“A ROLLICKING, ENGAGING AMALGAM OF OLD-TIME BLUES AND JUG BAND SENSIBILITIES. “….WALKING DOWN THE ROAD HAS OVERTONES OF EARLY DYLAN IN ITS GUITAR FINGER-PICKING AND WISTFUL DRAWL.” – JIM GILCHRIST, THE SCOTSMAN

“Woody Pines brings that low-key street corner style of performance to his stage show, but with all the polish and seasoned professionalism of a tour-bus-and-green-room rock stardom. Crackerjack musicianship goes a long way toward a band’s greatness, but showmanship seals the deal. Pines, on stage, is an old soul and natural performer, storied and steeped in the best of American music.”
– Alli Marshall Mtn. Xpress, Asheville, North Carolina